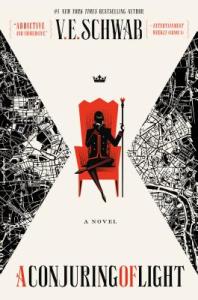 by V. E. Schwab
First sentence: “Delilah Bard – always a thief, recently a magician, and one day, hopefully, a pirate — was running as fast as she could.”
Support your local independent bookstore: buy it there!
Others in the series: A Darker Shade of Magic, A Gathering of Shadows
Content: Swearing (including f-bombs) and violence mostly. It’s in the Science Fiction/Fantasy section of the bookstore.

Spoilers for the other two, obviously.

When I finished the second book, I told one of my co-workers, who is also in love with this series, that I wasn’t as happy with the second book. But, I said, it’s a middle book in a trilogy. I bet (I hope!) the third will be great.

One of the Antari (those are blood magicians, of which there are only three… now…), Holland, has unleashed a bit of sentient magic on the Londons. It came from Black London (and it’s Kell’s fault as well, thinking Holland was dead and pushing him into Black London), and it’s possessed Holland and taken over White London. And now it — Osaran is its name — has it’s sights on Red London. And maybe even Gray. And it’s up to Kell, Lilah, Rhy, and everyone, really, to stop it. If it CAN be stopped.

It’s a long book — 600 pages — but it flies by, and Schwab spares no one. It’s vicious and emotional and heartbreaking and exciting. It’s just a sweeping epic story, (mostly) well-told, and definitely one I’d recommend.