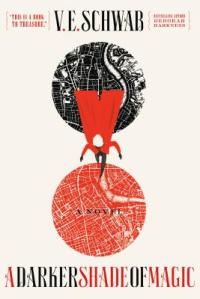 by V. E. Schwab
First sentence: “Kell wore a very peculiar coat.”
Support your local independent bookstore: buy it there!
Content: There are three f-bombs, some reference to sex (but none actual) and a lot of violence. That said, I think it’d be a good crossover for the high school set. It’s in the Science Fiction/Fantasy section of the bookstore.

I want you to know up front that whatever I write here won’t do this book any sort of justice. I really do need to work on an elevator speech for this one at work, because it really is THAT good, and I’d love it if more people read it. But, summing up the plot? Not as easy as it sounds.

Kell is many things: a brother, a prince, a magician, a smuggler. He lives in what he calls “Red” London, a world of magic and opulence, where the Thames runs red with blood. The reason he needs to give it a marker other than the city name is because Kell is one of the few people (well, really only two) who can travel between worlds. He moves through doors of his own making to “Grey” London (ours, set in the early-1800s) to “White” London (an incredibly violent and vicious place), but never, ever to Black London. That’s been sealed off from the other worlds after the magic there went bad and began killing people. However, when Kell accidentally brings a token from Black London back into his world, he discovers that he’s created a problem almost too big for him to handle.

I didn’t even mention Lila… a thief and pirate wannabe that Kell picks up in Grey London, who ends up being more than a sidekick.

Seriously: I don’t know where to start with this. It feels like a Gaiman novel, rich and opulent with its world-building, and yet Schwab never forgets the plot (not to mention the palpable tension when Kell’s life is on the line, multiple times). It twists and turns and weaves and is just unputdownable.

It’s also nice that it comes to a conclusion (albeit a bit rushed, but that’s often the case for me in fantasy novels), while leaving the door open for the sequel. Which, of course, I can’t wait to get my hands on.

6 thoughts on “A Darker Shade of Magic”