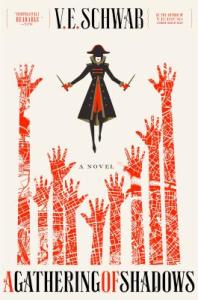 by V. E. Schwab
First sentence: “Delilah Bard had a way of finding trouble.”
Support your local independent bookstore: buy it there!
Others in the series:  A Darker Shade of Magic
Content: There’s violence, some mild swearing, and a couple of f-bombs. It’s in the Science Fiction/Fantasy section of the bookstore, but would be good for high schoolers as well.

It’s been four months since the end of Darker Shade and Lila has moved on. She secured a position on a ship (well, secured makes it sound like she wasn’t underhand in the dealings…) of a privateer. She’s enjoyed her time at sea, developing an intriguing relationship with the captain, Alucard Emery. Among other things, he’s taught her magic. And with the Essen Tasch — magic games between three countries — coming up, she’s intrigued. So much so, that she finds a way to get into the games.

Kell, on the other hand, has felt his life constrict. He is not trusted by the king, who has increased the guards around the king. He and Rhy are not prisoners, but close. So, when Rhy comes to Kell with an idea — compete in the Essen Tasch — Kell is intrigued. And, eventually, convinced.

A quick side note — much more than the action-packed first novel, this one felt like it was full of exposition. We learn about Lila learning magic. We read about Kell’s restlessness. But nothing much happens. And, I have to admit that I lost patience with that.

That said, I did finish it, and the ending was, well, a lot more exciting than the rest of the book. And I’ll probably read the next book.

One thought on “A Gathering of Shadows”