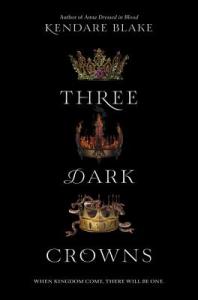 by Kendare Blake
Read by: Amy Landon
Support your local independent bookstore: buy it there!
Content: There’s some off-screen sex, and lots and lots of violence. It’s in the Teen section (grades 9+) of the bookstore.

The premise of this one is weird and awesome: on the island of Fennbirn, every generation there is born a set of triplet queens. They are fostered out, according to their “powers”, and each one has an equal chance at becoming queen. The catch? The one who becomes queen has to kill her sisters.

Our queens are Arsinoe, a naturalist, said to have power over nature; Katharine, a poisoner, who can ingest the most lethal poisons and not die; and Mirabella, an elemental, who has control over the weather. Except, things aren’t always as they seem. And those who the queens have been fostered to have much more power than the queens.

It had a really slow start to it; there was a lot of exposition about the magic (which I didn’t mind) and the characters (I liked some better than others). There were a couple of love stories, and a love triangle (of sorts). (I kept rooting for one of the queens to be lesbian; I think one is, but not the one I suspected.) It took a long time to get going, and the only thing that kept me listening was the narrator, who was quite spellbinding. For one, there’s a lot of weird names of people and places in this, and it was nice to have someone else pronounce Arsinoe (ar-sin-oye) and Katharine (cat-er-eene), instead of trying to figure it out on my own. I think Blake tried to balance all three queens’ stories, but she ended up focusing more on Arsinoe more than others. (Or at least I felt she did.)

It wasn’t a stand-alone, as I had hoped. And I called one of the major twists fairly early on. But were a couple of things that surprised me, and I have hopes for the direction that the sequel should go (we’ll see). It wasn’t the best fantasy I’ve read, but it wasn’t bad either.