by Cherie Priest
First sentence: “Denise Farber stomped up the creaky metal ramp and stood inside the U-Haul, looking around for the lightest possible box.
Support your local independent bookstore: buy it there!
Review copy provided by the publisher for the Cybils.
Content: There is some violence, but it’s not bad. And some mild swearing. It’s in the YA section (grades 6-8) of the bookstore.

Things I really liked about this: I liked that it was set in New Orleans, post-Katrina, and that white people moving into underdeveloped neighborhoods and displacing the black population was an issue, if only in passing. I liked the subtle feminism in the story, as well as the fact that the parents were really good. I liked that Priest highlighted a New Orleans that wasn’t voodoo or jazz music. And I liked the way she wove the graphic novel into the story.

Things I didn’t like: it just really didn’t work terribly well as a ghost story, for me. I never felt terribly threatened or scared by the ghosts, or even terribly worried for the characters (even though the ghosts were causing a LOT of damage to the house). I also didn’t like that the main character was balancing her new life in New Orleans — her mom and step-dad moved her there right before her senior year — and her old life in Houston. It was realistic, sure, but it felt unnecessary to the overall plot (which was the ghost story).

It wasn’t a bad book, but it wasn’t as good as I was hoping. 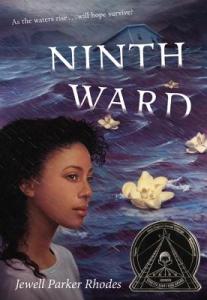 by Jewell Parker Rhodes
First sentence: “They say I was born with a caul, a skin netting covering my face like a glove.”
Support your local independent bookstore: buy it there!
Content: There are some intense moments, but it’s written very simply. It’s in the middle grade (grades 3-5) section of the bookstore.

Lanesha lives in New Orleans’ Ninth Ward, one of the poorest sections of the city, with her Mama Ya-Ya, who is the woman who delivered her, because Lanesha’s mother has passed on and her extended family doesn’t want her. But, even though they’re poor, Lanesha’s happy. That is, until a storm — Hurricane Katrina — comes riding in. Mama Ya-Ya passes on in the middle of the storm, and Lanesha is left to figure out how to ride out the flooding that came after the hurricane by herself.

I adore Rhodes, and the way she takes tough issues and makes them really accessible to younger readers. She knows her audience, knows how to talk to her audience, and knows how to make difficult subjects into a gripping, interesting, compelling story. This one is no exception (I hadn’t read it before!). The only difference with this one is that it has ghosts. Lanesha has the ability to see those who have passed on, and can even talk to them. (Which makes me wonder why this one ended up in the “realistic fiction” section of my children’s lit class…) Even so, the ghosts don’t seem out of place; it is New Orleans after all. And even though the ghosts play a role in resolving the ultimate conflict, I think Rhodes did an excellent job in making this a real middle grade novel, with the action being propelled forward by the children.

Excellent. But that’s no surprise.