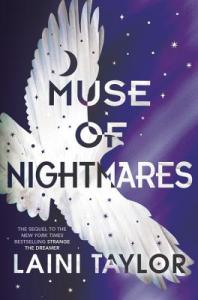 by Laini Taylor
First sentence: “Kora and Nova had never seen a Mesarthim, but they knew all about them.”
Support your local independent bookstore: buy it there!
Release date: October 2, 2018
Others in the series: Strange the Dreamer
Content: There’s references to sex and rape, and there’s violence. It’s in the teen section (grades 9+) of the bookstore.

Spoilers for Strange the Dreamer, of course.

This one picks up immediately after Strange ends. Lazlo is now one of the gods. Sarai is dead. And neither one knows what’s going to happen next. And what does happen next — which takes place over mere hours, it feels like — is completely unlike anything they expected.

Interspersed with flashbacks, where Taylor introduces a couple of new characters and explains how the gods came to be over Weep, Taylor looks at tragedy, occupation, and the choices we make when faced with fear and rage and love.

I actually think I liked this one better than Strange, primarily because it didn’t feel like  retread of old ground for Taylor. She’s come up with some interesting world-building, and even though the “bad guy” — in this case the one who started all the horror — has been long dead, his presence was still made known in the book. Taylor’s exploring — I think — the aftermath of occupation and how, even if the occupiers are long gone, there are still scars that need to be healed. On both sides, really. It’s a much more introspective book than her other ones , or at least it feels that way. There is some action, and Sarai really does play an important role in the end, but mostly it’s exploring character’s feelings of bias and prejudice and hate and revenge, and, ultimately, forgiveness.

I’m not sure this duology is for everyone, but I thoroughly enjoyed it.