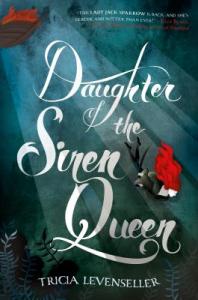 by Tricia Levenseller
First sentence: “The sound of my knife slitting across a throat feels much too loud in the darkness.”
Support your local independent bookstore: buy it there!
Review copy provided by the publisher.
Release date: February 27, 2018
Others in the series: Daughter of the Pirate King
Content: There is violence, obviously, and a LOT of sexual tension and kissing, but nothing ever happens. It’ll be in the the YA section (grades 6-8) of the bookstore.

Spoilers for Daughter of the Pirate King, obviously.

Picking up where we left off, Alosa has a copy of the map to the secret Isla del Canta, where the legendary treasure of the sirens lay. Initially, she plans to help her father find it, and then help rule the seas with him. Except, when she and her crew show up at the keep, Alosa discovers a secret that turns everything upside down. Suddenly, Alosa and her crew are no longer working with her father, they’re racing against him. And it will take everything that Alosa has to beat him to the island, and ultimately, defeat him.

Again: So. Much. Fun. There really isn’t a whole lot more to these (except for a very woke love interest), but man, female pirates are fun. Alosa is a great character, and I loved her relationship with Riden and with her crew. I loved that Levenseller was ruthless; she killed characters I thought were safe, which upped the ante and made the tension that much greater. I have a slight quibble with the end, but I’m going to let it go because it really was just fun to read.

And… it’s only a duology! So the story wrapped up. YAY! That said, I wouldn’t mind spending more time with Alosa and her crew again.

2 thoughts on “Daughter of the Siren Queen”