by Marc-Uwe Kling
Translated by Jamie Lee Searle
First sentence: “So you’re off to QualityLand for the first time ever.”
Support your local independent bookstore: buy it there!
Content: There is a lot of swearing, including multiple f-bombs, and some sexual content. It’s in the Science Fiction/Fantasy section of the bookstore.

In the future, our world has been automated to the point where we don’t have to think. Algorithms can pick your partner, determine your “level” in life (which determines your privileges and careers and your partner), personalize your literature and movies, and even send you stuff before you know you want it. QualityLand (which is the “bestest land”) has commodified absolutely everything. So when Peter — a Level 9 (anything under 10 is determined to be “Useless”) scrap machine operator (except he’s kind of bad at that, preferring to salvage the AI that he’s supposed to be scrapping — receives something he doesn’t want — a pink dolphin vibrator — from TheShop (think Amazon), he decides to return it.

This book is a LOT less about plot (there isn’t really much of one) and more an exploration of what life would be like if we took our current society (this was published in Germany in 2017) and pushed it to the extreme. It’s not an argument I haven’t heard before (living in the family I do, married to the person I am married to): while technology itself isn’t inherently bad, letting technology overtake our lives is (she says, while scrolling on Instagram). The people who are behind these corporations are NOT out for *our* collective good, they’re out for personal gain. They’re selling our data, they’re invading our lives, and we should be aware of what’s being taken from us.

That said, coming across as “fiction” makes it sound a whole lot less “grumpy old man conspiracy extremist” than in the essays and non-fiction books I’ve read (or heard Russell talk about). Maybe it won’t make me change my ways but there’s certainly a lot to talk about. It’s clever and weird and funny (at times). And it’s Kling is definitely one of the “prophets” out there screaming to the void (how many of the readers will buy it as an e-book from Amazon, and what’s the irony in that?) that maybe we need to remember our humanity. If only for the sake of our culture, if not ourselves. 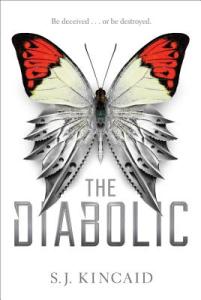 by S. J. Kincaid
First sentence: “Everyone believed Diabolics were fearless, but in my earliest years, all I knew was fear.”
Support your local independent bookstore: buy it there!
Release date: November 1, 2016
Review copy provided by the publisher rep.
Content: It’s violent, brutally so in some parts. (No worse than the Hunger Games series.) There’s some romance, but no sex. There’s inferences to rape, but nothing on-screen. I’ll probably put this in our YA section (grades 6-8) of the bookstore.

I  was trying to explain this book to someone the other night, and I realized 1) the plot is super complex, and all the parts are important. And 2) I needed to come up with a super-short, catching elevator speech for this one. I think I have it: if you crossed Battlestar Galactica with ancient Rome and thrown in a dash of Game of Thrones,  then tone it down a bit, you have The Diabolic.

Nemesis is a diabolic, a being genetically engineered to be bonded to someone in the upper class to be their personal bodyguard. Nemesis is programmed to love and protect (at all costs) Sidonia, the only daughter and heir of a senator in the empire. The current fashion is to repress education, especially in science and technology, and encourage this outlandish and extravagant religion they call Helionic. But the universe is falling apart, and Sidonia’s father is the leader of a faction that believes they need to encourage education and development of new technology in order to save the universe. The Emperor doesn’t like this, so he calls Sidonia to court in order to hold her hostage. This is where Nemesis comes in: Sidonia’s mother decides that she won’t lose her only child, and instead commits treason by sending Nemesis in her place. Which means Nemesis has to pass.

And that’s just the beginning.

This book is not only fun (though it begins a bit slow, and takes a little to get into), it’s incredibly thought-provoking, dealing with whether or not genetically engineered beings can be “human” and deserving of the same rights as others. There’s the issues of hierarchy and education vs. tradition. It’s fascinating. There are twists and turns (the final one is very, very satisfying), and I thoroughly enjoyed the love story.

I’ll admit that when my Simon rep told me about this one, I was dubious. But, she was right: it’s a fantastic book.

by Leopoldo Gout
First sentence: “The night Teo disappeared started off just like any other.”
Support your local independent bookstore: buy it there!
Content: There’s some mild swearing. It feels more like a YA book, so it’s in the YA section (grades 6-8), but I’d give it to an interested 5th-grader.

Three friends — Mexican-American Rex, Nigerian Tunde, and Chinese Cai — are at the top of the game when it comes to technology. Rex is a top-notch programmer and hacker, Tunde a brilliant engineer, and Cai a blogger who goes by Painted Wolf and exposes corruption in the government, and together they are LODGE, and have a massive on-line presence. Then they get word: the CEO of a major tech corporation is having an invitation-only competition for the world’s best and brightest. And Tex, Tunde, and Cai all need in, for different reasons. Not the least of which is to win.

On the one hand: this book is SO cool. It’s nice to have a tech-laden book that isn’t scifi, but rather just people using advanced technology the way it’s supposed to be used. Bonus points, as well, for an effortlessly diverse cast. (I did find Tunde’s chapters a bit odd, but I eventually warmed up to it.) It makes sense that all the people at the competition wouldn’t be white boys, and so I appreciated having not only a good ethnic mix (the CEO’s Indian, on top of it all!), but a good mix of girls and boys. The design of the book is cool too, from the sleek cover, to the art and graphics mixed in, depending on which narrator’s POV we’re reading. (Tunde’s was the most elaborate, Rex the most spare.)

But, I’m not sure cool is enough. For one thing, I was expecting a stand-alone, and about 2/3 of the way through I realized it wasn’t, and I’ll admit it: I lost interest. *sigh* The characterization lacked a bit, especially of the Big Bad; why on earth is he trying to bring the world’s tech down, and what does he want with our super-smart, capable kids? Questions that were, unfortunately, left unanswered. It’s not that it was bad — I finished it after all — but it just didn’t make me super enthused. It wasn’t bad. But it wasn’t super great either.