by John Green
First sentence: “At the time I first realized I might be fictional, my weekdays were spent at a publicly funded institution on the north side of Indianapolis called White River High School, where I was required to eat lunch at a particular time — between 12:37 p.m. and 1:14 p.m. — by forces so much larger than myself that I couldn’t even begin to identify them.”
Support your local independent bookstore: buy it there!
Content:  Lots and lots of swearing, including f-bombs. It’s in the Teen section (grades 9+) of the bookstore.

This is a book about OCD and anxiety. This is also a book, I think (having followed John Green for at least 7 years or so on YouTube/Podcasts/Social Media), that channels John Green the best out of all of them. The plot, really, is almost incidental: it’s about a girl, Aza, and her friend, Daisy, who decide that they’re going to find out what happened to this developer who was on the lamb. The catch: Aza knew the developer’s son, Davis, when they were eleven. Mostly, though, it’s a chance to be inside Aza’s head, to experience first-hand what it’s like to be someone with OCD, with anxiety, and how crippling it can sometimes be.

I’m not sure if it’s “good” or not; it made me cry at the end, and I think that it’s probably a more mature book than his other ones. (There really aren’t any pretentious, super-smart teenagers here; everyone, even Davis, seemed relatable and not annoying.) But there was also a disconnect to it that I hadn’t felt in his other books. That’s not to say it wasn’t enjoyable; it was. Green knows how to craft a story, and throw in asides that don’t really feel like asides. But, I didn’t feel totally immersed in it (which may be me more than anything). Still, worth a read.

by Nina LaCour
First sentence: “Before Hannah left, she asked if I was sure I’d be okay.”
Support your local independent bookstore: buy it there!
Release date: February 14, 2017
Review copy sent by the publisher’s rep, who is my favorite.
Content: There’s one f-bomb, some inferences to sex and a scene where the main character gets drunk. It’ll be in the Teen Section (grades 9+) section of the bookstore.

I know from the outset that I’m not going to do this book justice. Partially because the plot is simple: it’s Christmas break, and college freshman Marin doesn’t want to go home for lots of reasons. The chief one being that right before she left for college, her grandfather — her only living family — died. So her best friend (the one who has been texting and calling and Marin’s not answering) comes to see her. And over the next few days before Christmas, and through a series of flashbacks, we find out the depths of Marin’s grief.

Which is really what this book is “about”: the varied ways we all deal with loss, heartbreak, lonliness, and grief. Some ways are healthier than others. Some have friends who are willing to put in the work to rescue them. And sometimes, distance and time can be both the best and the worst thing. 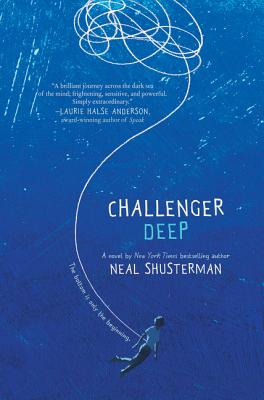 by Neal Shusterman
First sentence: ”
Support your local independent bookstore: buy it there!
Content: There’s some talk about drinking, but none actual. And there’s some mild swearing. But the reason it’s in the Teen (grades 9+) section of the bookstore is because it’s an extended metaphor. I’d give it to someone in 7/8th grade if I thought they’d “get” it.

Very seldom does a jacket flap so succinctly sum up a book, but in this case, I think whomever at HarperTeen did this, was spot on:

Caden Bosch is on a ship that’s headed for the deepest point on Earth: Challenger Deep, the southern part of the Marianas Trench.

Caden Bosch is a brilliant high school student whose friends are starting to notice his odd behavior.

Caden Bosch is designated the ship’s artist in residence to document the journey with images.

Caden Bosch pretends to join the school track team but spends his days walking for miles, absorbed by the thoughts in his head.

Caden Bosch is split between his allegiance to the captain and the allure of mutiny.

This book. I’ve been avoiding it for months, and I really only picked it up because Pop Culture Happy Hour did a recent podcast on it. But this book pulled me in and didn’t let me go. I don’t know of a more accurate, a more compelling, a more beautiful rendering of the spiral that mental illness — it really doesn’t matter what Caden’s diagnosed with — is. Shusterman gives us an allegory with the ship that is compelling and intriguing and maybe a little confusing. But the confusion is part of the trip; Shusterman not only wants us to read about Caden’s descent into illness, he wants us to feel that with him. And feel I did.

Powerful. And definitely one that will stay with me for a long time.

by Paco Roca
Support your local independent bookstore: buy it there! (Kind of; it’s not available in the States, yet.)
Content: There’s really nothing objectionable, content-wise. The subject matter is older adults in a retirement home, so if you’re interested in that, go for it. The book would be in the Graphic Novel section of the bookstore.

One of the members of my in-person book group is a gerontologist, and reads a TON of literature on the subject. She’s always digging up unusual and interesting books that feature older adults and their life experiences, partially for her work, but mostly because it fascinates her. She didn’t pick this book for our discussion however, one of the other members did, hoping that our gerontologist hadn’t read it yet. (She hadn’t, but had seen the movie based on it.)

It’s a very European book, written by a Spanish author and set in France. It’s the story of one gentleman, Ernest, who is suffering from Alzheimer’s and whose children can no longer care for him, so he ends up in a care facility. He’s a bit confused and hurt that he ended up there, so he’s initially resistant to settling in. His roommate, Emile,  is more than welcoming, however. He takes Ernest under his wing and shows him around the home, introducing him to all the people who live there.

It’s their story, of their friendship, of the living they do from day-to-day, of the small joys and the larger hardships, of the inevitability of age. There’s a lot to think about, and even though it made me sad — getting old is not for wimps — I thoroughly enjoyed reading this story.