by Ibi Zoboi
First sentence: “These clouds are a concrete wall!”
Support your local independent bookstore: buy it there!
Release date: August 27, 2019
Review copy provided by the publisher.
Content: It’s kind of hard to tell imagination from reality and the print is a bit on the small side for a middle grade book. It’ll be in the middle grade section of the bookstore, but I’d give it mostly to 5-6th graders.

Ebony-Grace lives in Huntsville, Alabama with her mom and grandpa, who works at the NASA space center. He’s only an engineer — there’s no black astronauts in 1984 — but he inspires Ebony Grace. They have their own imaginary world, where he is Captain Fleet and she is Cadet E-Grace Starfleet, and the go on Star Trek-inspired adventures throughout space. Except, now Ebony is being sent to her father’s in Harlem, which seems like a whole new planet — she dubs it No Joke City — with a whole bunch of “nefarious minions” that she can’t quite figure out. It doesn’t help that the friend she made last time she was in Harlem (three years ago!), Bianca, has moved on from space adventure games and is now jumping Double Dutch, breakdancing, and rapping with her crew, the Nine Flavas. Ebony has no idea how to fit in and just wants to go home.

On the one hand, this is a fun bit of historical fiction and I appreciated a geek girl main character. I loved that Ebony was super into space and science fiction and super knowledgeable about it. It was nice to see a Black girl be into something that is usually reserved for white boys. So yay for that! And I could relate to Ebony’s feeling of otherness, coming from the South and going to the north. I moved to Michigan from Utah right before 6th grade, and felt a lot of the same sense of outsiderness. I talked funny, I didn’t understand the lingo, and it didn’t help that I hadn’t really listened to the radio (like ever: I mostly listened to my parents records). This one will really resonate with kids who feel like they’re on the outside looking in.

What I didn’t like — what I reacted really viscerally and negatively to — were the adults in the book. I think they’re historically accurate: Ebony’s mom is more concerned with the way Ebony looks and that she’s polite and obedient to her elders, and her father isn’t much better. But I wanted to shake them all. They have a girl who is interested in SPACE! Why are they calling her crazy and telling her she needs to stop with the nonsense?!? Just because she’s a girl?!? The rampant sexism (again: historically accurate) drove me absolutely nuts. And it trickled down to the kids that Ebony met as well: they “grew up” and cared for more “grown up” things — clothes, boys, competitions, and I was so angry that they kept calling Ebony crazy and stupid for liking the things she liked.

I also had issues with the ending — Ebony never finds out what happens to her grandfather who gets in a bit of trouble off-screen and then suddenly dies (WTH?!) — but it’s a middle grade novel, so I can forgive that.

In the end, I’m not entirely sure what to feel about this book. I want to recommend it, because I like Zoboi and I like the idea of a geeky Black girl. I just may not be able to get past my anger at the adults. 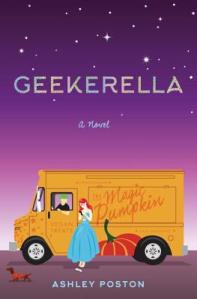 by Ashley Poston
First sentence: “The stepmonster is at it again.”
Support your local independent bookstore: buy it now!
Release date: April 4, 2017
Review copy provided by the publisher.
Content: There’s some emotional abuse, and some mild swearing (a couple of s-words). It will be in the YA section (grades 6-8) of the bookstore.


Elle Wittimer’s mother died when she was little, and her father remarried to a woman with two daughters. He died a few years after that, leaving Elle alone with her step-mother and -sisters. She lives for the show that she and her father loved, Starfield (a sci-fi TV show that got canceled). It’s being rebooted into a movie, starring a teen heartthrob (do people even say that anymore?) Darien Freeman, whom Elle doesn’t think is a worthy replacement for the ship commander, Carmindor.

Darien has his own issues: he’s a geek himself, adoring Starfield. But, his acting career (managed by his father), has gone the way of teen soaps, and he’s garnered a legion of screaming, swooning fans. Which, of course, means that that Real Fans of Starfield are suspicious.

It’s not coming through yet, but this is an incredibly clever retelling of Cinderella. There’s no magic, just pure and simple fun. But it’s also incredibly clever the way Poston wove the familiar elements of the tale in. From the vegan taco truck, The Magic Pumpkin, to the glass slippers, it’s all there. Some of the characters are stereotypes, but others are surprising, and I loved the world and the show that Poston created.

by Brian Katcher
First sentence: “Zak!”
Support your local independent bookstore: buy it there!
Content: There’s some swearing, and one (brief) naked scene (which was alluded to), as well as passing references to drug use and drinking. It’s in the YA section (grades 6-8) of the bookstore.

I can sum up this book in one sentence: Hermione and Michael Cera spend a crazy action-filled night at Seattle ComicCon and fall strongly in like.

It sounds simplistic, and like I didn’t care for the book, neither of which is true. The book may not be tackling the deepest subjects ever, but it’s not all fluff. And I found myself — in spite of the improbable situations that Ana and Zak found themselves in — thoroughly enjoying their adventure.

Ana is the daughter of super strict parents. Seriously: she believes that she makes one mistake — like her older sister, Nicole, did — and she’s kicked out of the house. So, she does everything right, from following her parents’ (insane) rules to letting them choose her college for her.

Zak’s father died a few years back and his mother recently remarried a guy Zak — uber geek extraordinaire — has nothing in common with. So, he spends his time being the slacker, failing health (by turning in a paper copied from Wikepedia, hyperlinks and everything. Who does that?), and having no desire to even go to college when he graduates in the spring.

They come together one fateful night, when the health teacher (who also happens to be the quiz bowl coach), um, encourages Zak to come to a tournament (by telling him she’ll waive his plagiarized paper and allow him to pass the class) instead of going to his favorite con, Washingcon, that happens to be in Seattle the same weekend as the tournament. Ana is loathe to have him on her team, especially since her first impression of him was terrible. Zak is loathe to be on the team, mostly because he finds Ana rigid and cold and because he’d much rather be AT the con rather than just near it. So, of course, they spend the entire night together at the con, looking for Ana’s younger brother who snuck out to attend.

The con itself was my favorite part (good thing it was most of the book); having never been to one before (shock! It’s on my bucket list, if only to people watch), I thoroughly enjoyed the con atmosphere Katcher painted. I don’t know if it was realistic; there were bullies and gay weddings and gaming tournaments and singing and Zak being some sort of geek god, but I ate it up. If that’s what a con is, then heck yeah, I want to go.

No, it wasn’t perfect: the ending took a turn for the weird when they ran into trouble with a drug runner, and the confrontation with Ana’s mom (when it came out that they were lying about where they were) was pretty unsatisfying (especially since I has just spent the whole book hating her). But, for the most part, it was a thoroughly enjoyable geeky adventure.

And you really can’t ask for much more than that.