by Stephanie Burgis
First sentence: “Once upon a time in a beautiful dirty, exciting city full of people and chocolate and possiblities, there was a girl so fearless and so daring that…”
Support your local independent bookstore: buy it there!
Others in the series: The Dragon with the Chocolate Heart
Review copy provided by the publisher
Content: There’s some tense moments. It’s in the middle grade section of the bookstore.

So Silke has managed to help make peace with the dragons, and she and Adventurine are happily helping make chocolate. Except, Silke still wants more: she misses her parents who disappeared with the Elves six years ago. She wishes she had a better home than on the riverbank with her brother. She just wants… MORE. So when the Crown Princess asks her to be a spy during the “diplomatic” visit from the Elves, Silke jumps at the chance: If she succeeds, not only will she get to live permanently at the palace, she might find out where her parents are.

But, it’s not all roses and chocolate (well, there is some of that). It’s hard fitting into court culture, especially for someone who needs to move as much as Silke, and it looks like the Elves may be able to trick their way into and out of just about everything. And maybe, just maybe, Silke’s talents like in something other than spying.

This is still a super sweet (but not cloying!), super fun middle grade series. I adore the characters — there was probably not enough Adventurine here, but I’m curious about Sofia, the younger sister princess, because she was whip-smart and intriguing. I did want to shake Silke sometimes, but overall, I enjoyed where the book went.

The other nice thing about this series is that it doesn’t rely on the previous one. Sure, the events of Dragon played into this, but it really was its own stand-alone story, and it came to a very satisfying conclusion.

I definitely will be picking up the next one. Eventually. 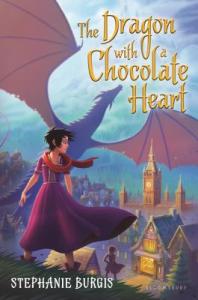 by Stephanie Burgis
First sentence: “I can’t say I ever wondered what it felt like to be human.”
Support your local independent bookstore: buy it there!
Content: There are some fantasy action moments, and a few intense scenes. It’s in the middle grade (grades 3-5) section of the bookstore.

Adventurine is a young dragon, up in the mountains with her family, who longs for something… more. She’s supposed to find her passion — it was philosophy for her brother, and being amazing for her sister (there’s a lot of sisterly comparison by Adventurine, which is something I noticed, because of my daughters) — but she mostly just wishes she could fly around without an escort. So, she does what most rebellious dragons will do: she sneaks out. And subsequently gets turned into a human by a food mage’s magical cup of hot chocolate. The upside: she’s discovered her passion in chocolate. The downside: she’s a human.

Thus begins an adventure that is chocolate-filled and so much fun. Burgis captured Adventurine’s confusion at being a human as well as her lack of knowledge about human culture so well. But Adventurine never slid over into being annoying. She always remembered she was a dragon at heart, and while that sometimes put her in awkward situations, it also meant that she was able to make the most of her situation. Additionally, her family is fantastic! They’re a bit over protective (but she’s not a fully formed dragon!), but in the end, their love of her is part of both the conflict and the solution and it’s quite sweet. Actually, that’s a great word for the book as a whole: sweet. It’s sweet and charming and a delight to read.

by Gabrielle Zevin
First sentence: “The night before my junior year — I was sixteen, barely — Gable Arsley said he wanted to sleep with me.”
Support your local independent bookstore: buy it there!
Content: There’s talk of sex and a lot of kissing, but nothing graphic. And there’s talk of violence, but again, nothing graphic. It’s in the YA section (grades 6-9) of the bookstore.

This one is a hard one to sum up, partially because the world Zevin created is so complex. It’s futuristic, but not exactly a post-apocalyptic or dystopian. It’s a world where things are strictly rationed, and coffee and chocolate and books are illegal. So, much like alcohol in the 1920s, there is a strong black market for those items. And our main character, Anya Balanchine (her friends call her Annie), is part of the Balanchine mafia family that has a strong presence in the chocolate market. Her father was the head of the family until he was shot and killed (in front of her) when she was 9. Annie and her older brother, Leo (who is slightly mentally disabled due to another hit meant for her father that killed their mother and disabled Leo) and younger sister Natalya have been raised the past 7 years by their grandmother, whose health is slowly failing.

Over the course of the year, things spin out of control for Annie. Her ex-boyfriend, Gable, ends up poisoned by chocolate, and Annie ends up in juvenile prison because of that. She falls for and dates the son of the assistant DA, in spite of the extreme pressure to break it off. She stresses about Leo, especially since he begins working for the family. And her grandmother finally passes away.

All that managed to fill up the book, which I wanted to like very much. But, aside from world creation, there really isn’t much there. Annie is a fascinating character, but I got tired of her waffling. I wanted her to step up and take charge. It’s not good when the most interesting character is the head of the Japanese mafia family who shows up for probably 10 pages. I hoped for more out of this one, and was disappointed.

I might give the second one in the series a try, just to see if it gets any better.