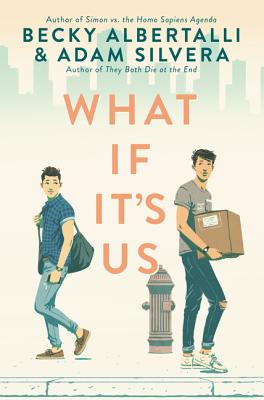 by Becky Albertalli & Adam Silvera
First sentence: “I am not a New Yorker, and I want to go home.”
Support your local independent bookstore: buy it there!
Content: Loads and loads of f-bombs, some mild drinking, as well as some off-screen sex. It’s in the Teen section (grades 9+) of the bookstore.

It’s the summer before senior year, and Arthur Seuss is in New York City from Atlanta with is parents for the summer. His mom is a lawyer working on a big case, and he’s got an internship. But mostly, he’s there to see the city and hopefully a few Broadway shows. Love is definitely NOT on the radar.

And then he bumps into an attractive boy at the post office and he’s smitten. The problem? He didn’t get the boy’s name.

Ben is trying to just make it through the summer. He’s come off a bad breakup with his boyfriend, Hudson, and he’s stuck in summer school because he failed chemistry. He just wants to pass the class. Love is definitely NOT on the radar.

That is, until Arthur (and the universe) conspires to get them together.

So this is very rom-com-y: a meet-cute, they have to work to get together, ups and downs in a relationship… it hits all the tropes. But, it was still a lot of fun. Especially if you (like me) really like romcoms. I adored Arthur and his extra-ness, and Ben and his great Puerto Rican family. I loved the side characters (especially Dylan; he was so great) and it’s nice to have a couple sets of decent parents in a YA book.

So, while it’s not really breaking any new ground (maybe in that it’s a gay romcom?) it’s still an incredibly fun read.