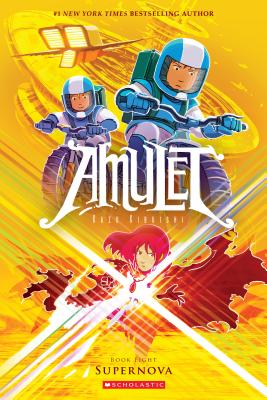 by Kazu Kibuishi
First sentence: “Mind if I join you, Traveler?”
Support your local independent bookstore: buy it there!
Others in the series: The Stonekeeper, The Stonekeeper’s Curse, The Cloud Searchers, The Last Council, Prince of the Elves, Escape from Lucien, Firelight

First: I would highly suggest you read (or re-read) the other seven books in the series before tackling this one. It’s been more than two years since the last book came out, and if you’re anything like me, you won’t remember what’s going on. Also: it’s a fantastic experience reading one right after the other, seeing how Kibuishi has fit everything together and foreshadowed events throughout the series.

That said, there really isn’t much to say.  The resistance is fighting an Incredible Battle Against Impossible Odds. Emily is fighting for control with the Voice of the Amulet. Everything seems dire. And, no, it doesn’t quite end here. There’s one more (it does say “to be concluded in book nine” at the end). But, Kibuishi’s art is still amazing, and the story telling still spot-on. And the characters still worth adventuring with.

I will be incredibly sad to see this come to an end after so many years, but I’m sure it will be completely worth it.