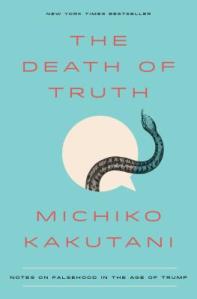 by Michiko Kakutani
First sentence: “Two of the most monstrous regimes in human history came to power in the twentieth century, and both were predicated upon the violation and despoiling of truth, upon the knowledge that cynicism and weariness and fear can make people susceptible to the lies and false promises of leaders bent on unconditional power.”
Support your local independent bookstore: buy it there!
Content: It’s a small book, but dense, dealing with philosophy and politics and it doesn’t hide that it’s critical of Trump. It’s in the politics section of the bookstore.

I did learn a few things: I had forgotten (or never learned) that the Fairness Doctrine — the policy which demanded that media give equal time to all political parties, and which I learned about while studying journalism in college — was overturned (disbanded?) in the late 1980s/early 1990s. Combine that with the Telecommunications act in 1996, which allowed for media conglomerates, and you end up with our current media climate, in which someone like Trump can call reputable papers Fake News because he disagrees with them, and in which you have a majority of Republicans who believe that the media is lying and making up stuff. Of course it’s more than that, but that’s what I found interesting about it.

(As an aside, Russell, who actually studies these things, found the book to be lacking. My take-away? This book was not meant for scholars.)

In the end, though, Kakatuni doesn’t really offer any solutions how to solve this problem. Though, in talking about it, I came up with one: Turn off the TV, shut down social media, and talk to someone, especially someone who disagrees with you. Maybe then, we can figure out how to look past this fear and let people speak their truths, and find a common ground again.

One thought on “Death of Truth”