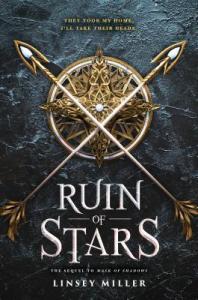 by Linsey Miller
First sentence: ”
Support your local independent bookstore: buy it there!
Others in the series: Mask of Shadows
Review copy provided by the publisher.
Content: There’s a lot of violence (but not overly graphic) and one tasteful sex scene (that’s more implied than anything). It’s still in the YA section (grades 6-8) of the bookstore, but I’m thinking about moving it.

When we left Sal, they had  just become part of the Queen of Igna’s right hand, taking up the mantle of Opal. But, since that moment, Igna is facing imminent war. Their neighbor, Erland — they of the restrictive gender norms and constricting policies, they who also wiped out Sal’s birth land — has invaded Igna, taking back some of the land they lost in the war ten years earlier. And Sal has  been asked to put a stop to all this by killing Erland’s leader and those who conspired against Igna. It’s easy for Sal to take this assignment: the names of the people coincide with the names on their list of people to exact revenge for wiping out their home and family.

The problem? The cost that assassinating these people and stopping the war is extremely high: costing Sal their friends, their love, and possibly their life.

This is a fantastic end to Sal’s story. Seriously. Miller’s got pacing and writes action incredibly well. I found myself getting anxious for Sal and their mission as I went through the book. I still think that Miller handled the fluidity incredibly well; it was part of the plot in that Erland’s culture was incredibly homophobic and suppressed anything that didn’t buy into traditional gender norms, and Miller was a bit heavy-handed with letting readers know that this was part of the reason Erland was the “bad” guys (though she makes a much more compelling case for readers to dislike people — or at least those in charge — from Erland later), but she settled into the plot and the book went super fast.

Incredibly exciting, and I really loved the ending. A strong series.

One thought on “Ruin of Stars”