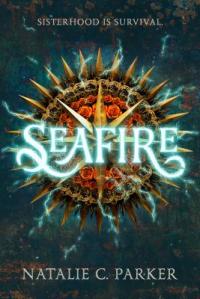 by Natalie C. Parker
First sentence: “Cadelonia stretched along the prow of the Ghost as the ship sliced through black water.”
Support your local independent bookstore: buy it there!
Review copy provided by the publisher
Content: There’s some violence and some mild swearing. It’s in the YA section (grades 6-8) of the bookstore.

Caldonia Styx is the captain of a rogue ship, Mors Navis, one of the few that’s not in the clutches of the feared drug lord, Aric Althair. She has a crew of all girls, ones that Caldonia and her best friend Pisces, have collected and saved from Althair. They also are a thorn in Althair’s side — hitting his barges and collection ships, trying to stop him whenever they can.

But, they end up with one of Althair’s Bullets — his soldiers — on board and even though Caldonia doesn’t trust him, he has information about Caldonia’s and Pisces’s brothers, information that will allow them to be rescued. If only the Mors Navis can get to them.

Going in, I was expecting pirates and old-fashioned ships, but got something more futuristic: these ships are solar powered and cut through the water at high speeds. There’s scuba diving equipment, bombs and some heavy-duty drugs that brainwash people. There’s a drug lord that kidnaps little kids as “payment” and subjects them to a life of servitude. There’s awesome girls, and Parker’s a ruthless author: no one is safe in her world, which ramps up the tension. It’s action packed — there are several battles and narrow escapes in this book — and even though Caldonia carries a secret that I felt like yelling “just tell it already”, she was a good character to spend a book with. She’s a smart captain, and gets Parker gives her the respect she’s due as that. And her crew works together really well, as well.

It’s a great start to a series, one I’m definitely going to keep an eye on.