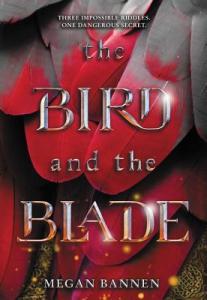 by Megan Bannen
First sentence: “I arrived in Sarai on the fifteenth day of the seventh month — Ghost Day — but for the first time I dream of my brother, Weiji, is two months later, on the night I meet Khalaf.”
Support your local independent bookstore: buy it there!
Review copy provided by the publisher.
Content: There are several f-bombs (I think I didn’t count more than four) and other mild swearing. There is also frank talk about genitals. It’s in the Teen section (grades 9+) of the bookstore, but I think an interested 7th grader could handle it.

They say, “Don’t judge a book by a cover”, but we all do.  And my judgement for this one, when I first saw the cover was “okay, it’s going to be a light fantasy; I hope it’s good.” Well. It’s not a light fantasy (okay, so there’s a small ghost element at the end, but I’m not really counting that). Set in the late 13th century and  loosely based on the opera Turandot, it’s a sweeping story about a captured girl from the Song empire, Jinghua, the slave of the Kipchack Khanate. The il-khan, Timur, and his youngest son, Khalaf, are on the run after an invasion from a neighboring khanate, and through a twist of fate, Jinghua ends up with them as they travel across the Mongol empire. Once Khalaf finds out that the daughter of the Great Khan, Turandokht, is refusing to marry anyone unless they solve three riddles, Kahalf decides that that’s the only way to save his father and his kingdom, so they head there. Khalaf to solve the riddles, Jinghua to stop him.

It’s a difficult one to sum up, this book, because there is so much going on. It’s a forbidden romance — as Jinghua and Khalaf spend time together, they find they have  a mutual respect and admiration that develops into something more, but a son of an il-khan and a servant can never be together in any real way. It’s a road trip — as her characters travel, Bannen takes us through multiple parts of the Mongol Empire, showing just how vast and varied it was. And it’s a work of historical fiction, though it felt like it had a modern sensibility. Khalf stood up for Jinghua in ways that I’m not sure a 13th century man would, but I found I didn’t mind. It’s a unique book, set in a unique place, with some fantastic characters.

One thought on “The Bird and the Blade”