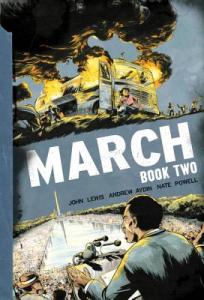 by John Lewis, Andrew Aydin, and Nate Powell
First sentence: “Brother John — Good to see you.”
Support your local independent bookstore: buy it there (book 2, book 3).
Others in the series: March (Book One)
Content: There is a lot of violence, and use of the n-word. It’s in the non-fiction area of the graphic novel section of the bookstore.

This picks up where March (Book One) leaves off. Lewis is part of student non-violent protests in Nashville in the early 1960s, but soon leaves that to join the Freedom Riders: a group of African Americans who, in 1961-1962, put supposed desegregation to the test. They rode Greyhound buses though the south, stopping at cities in Virginia, Georgia, Alabama, and Mississippi, with — as you would guess — pretty disastrous results. They were yelled at, beaten, arrested, thrown in jail, loaded up in cars and left in Klan territory, and the buses were blown up… let’s just say that, in short, white people in the south were TERRIBLE people.

All through this, Lewis (and others) preached the gospel of non-violence (which just makes white people look like terrorists. Really.): they didn’t fight back, they didn’t talk back, they just exercised their right (!) to do what they feel they had a right to do.

The book also follows Lewis through the March on Washington in 1963. (I didn’t know he was there, or even that he spoke! In fact, there’s a side note by him that out of everyone who spoke, he was the only one still living.) It was fascinating, learning about the politics behind that march, and about Robert Kennedy’s change of heart as well.

It’s a well-done graphic novel, one that is still very timely to read. As a white person, it definitely made me more aware of what people went through in the 1960s to get just basic rights, and I’m more aware now of how those rights aren’t still completely equal 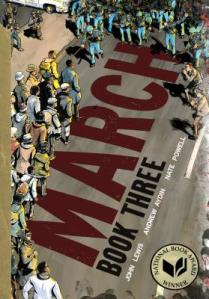 March (Book Three) picks up after the church bombing the beginning of 1964 and goes through the march from Selma to Birmingham. My thoughts are pretty much the same as after reading book two: white people are so entrenched in their “way of life” that they can’t abide by change at all. And the thing I kept coming back to was that, in the intervening 54 years, that white people are still entrenched in their “way of life”, we just call it by different things now. It’s still racism. And it still is wrong. This one was difficult to read, and made me think, over and over, that an eye for an eye just makes everyone blind. I hope I’d have the courage to stand up to those who use their power to make others “less than”, those who call others “animals” or “dirty” or “from s-hole countries”, those who want to abuse their power to keep themselves in power… even if it means sacrificing my life. John Lewis and all those who stood by him are true heroes, and I wish there were more people like them now.