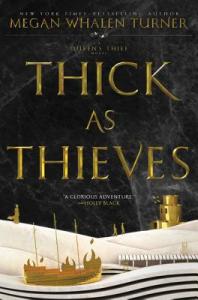 by Megan Whalen Turner
First sentence: “It was midday and the passageway quiet and cool.”
Support your local independent bookstore: buy it there!
Others in the series: The Thief, The Queen of Attolia, The King of Attolia, A Conspiracy of Kings
Review copy provided by the publisher.
Content: It’s a bit slow, and the main character is an adult. There is also some (not very graphic) violence. It will be in the YA section ( grades 6-8) of the bookstore.

Turner writes in the introduction to the ARC that you really don’t have to read the other books in the series in order to enjoy this one. It does help, of course, but this one holds its own on its own. And she’s right: it’s been years since I’ve visited these characters, and it didn’t matter that I can’t quite remember exactly what The Thief was about. (Which means I need to reread it.)

Kamet is a slave of one of the high officials in the Mede empire. He’s happy, pretty much, because he’s his master’s right  hand man, which means he has a certain amount of privilege and power. And then, in the course of a single day he is offered freedom from a strange Attolian soldiear, and he is told that his master was poisoned. He doesn’t want to be blamed (and killed) for the murder, so he takes the Attolian up on his offer and leaves.

Most of the book is Kamet and “the Attolian” (you’re not given a name until the end, but if you’ve read the others, you’ll guess who it is) making their escape. It’s not a straightforward thing: they have difficulties, they’re chased by the emperor’s guard, they meet friends and foes alike. It’s not a fast book, it’s not an intense book, but it is an intriguing journey, and the developing friendship between Kamet (who is not always the most reliable narrator) is a delight.

There are some nice twists at the end as well, ones I kind of saw coming but was still delighted by. And Turner helpfully left the door open for another book. Which is always good, because I’ll happily visit this world anytime she decides to set a story there.