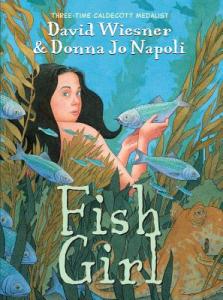 by David Wiesner and Donna Jo Napoli
Support your local independent bookstore: buy it there!
Release date: March 7, 2017
Content: It’s a simple graphic novel, but it has dark undertones. Probably not for the super sensitive souls. It will be in our middle grade graphic novel section.

I usually don’t write about books this far in advance, but the end of the year is nigh, and I couldn’t wait for this one.

I didn’t know I needed a graphic novel from David Wiesner and Donna Jo Napoli, but this book is a gift. The story is simple: a mermaid living in an aquarium with the fish and her octopus friend, run by the person she believes to be her only family, Neptune. Then she meets a girl, Livia, who — by the fact of her friendship, by some simple questions  — expands the mermaid’s world.

But it’s more than that.  There’s a dark underbelly, as the mermaid — dubbed Mira by Livia — becomes brave enough to explore her world and as she realizes what Neptune has done. There’s themes of friendship and choice and standing up for oneself running through the book, themes that aren’t heavy-handed, but rather subtly employed throughout for those who are looking for them. Napoli is a master writer, and Weisner speaks volumes with his gorgeous (and often fantastical) watercolor drawings.

I didn’t know that a Weisner/Napoli graphic novel was something I wanted in life. Now, I can only hope they team up for another.