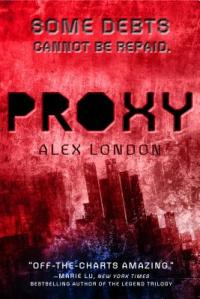 by Alex London
First sentence: “Even a perfect machine wasn’t built to go this fast.”
Support your local independent bookstore: buy it there!
Content: There’s a lot of violence, including several deaths that, while not graphic, are a bit shocking. There’s also some futuristic drug use. It’s in the YA section (grades 6-8) of the bookstore.

In this vision of the future, there are those who have and those who have not. Syd is one of those who have not; in order to pay for the debt in incurred by being alive, he was forced to become a proxy for the child of a rich man. It works like this: the rich man takes on Syd’s debt, and in return, Syd takes on the punishments every time the child — Knox — gets in trouble. Seems fair, right? Except, it’s not that simple. It’s people’s lives they’re casually playing with, and Knox is exceptionally reckless. And when he accidentally kills a girl and Syd is condemned to die, Syd’s had enough: he’s going to escape this hellhole. But things aren’t as straight-forward as Syd thinks, either. And soon, Syd and Knox are on the run from a lot of people, and end up way over their heads.

I liked this one. It’s a smart vision of the future — dystopian, yes, but it’s the capitalistic system that’s become the cruel overlord rather than the government. He’s playing with class and debt and the relationships between the two. There’s a bit of chosen-one-ness going on here as well, but I thought London resolved it in a unexpected way. He definitely kept me turning pages, and I found that even the more annoying characters (Knox…) had layers to them. I hadn’t read anything by London before, and this was a great starting place.

And the best thing? I don’t have to wait for the sequel to come out!