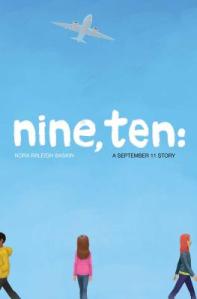 by Nora Raleigh Baskin
First sentence: “Everyone will mention the same thing, and if they don’t, when you ask them, they will remember.”
Support your local independent bookstore: buy it there!
Review copy provided by the publisher.
Content: It handles the tragedy of 9/11 on a level that is appropriate for the 3rd-5th grade crowd. It’d also make an excellent read-aloud. It’s in the middle grade section (grades 3-5) of the bookstore.

Everyone (well, everyone of a certain age and older) knows the story of what happened on 9/11. But fifteen years on, there isn’t as many of the kids who know about that day. And so, Baskin helps introduce the tragedy through the stories of four eleven-year-old kids for the forty-eight hours before the planes hit. There’s Sergio, an African American kid from Brooklyn who is trying to make a better life for  himself but whose deadbeat dad is getting in the way. There’s Aimee, who has recently relocated from Chicago to L. A. and whose mother has a meeting in New York City that week. And there’s Will from Pennsylvania, whose father died in a freak accident and who is trying to get over that. And there’s Nadira, a Muslim girl from Ohio, who is trying to figure out the whole middle school thing. 9/11 changes each of their lives — though I’ll spoil it: no one has anyone they love die — in ways they could not have expected.

The thing I liked best was not so much the stories, or wondering how it would all play out (and wondering if Baskin would kill anyone). It was that Baskin caught the emotion of the day so very well. I was in Mississippi, having recently moved from DC, and I remember being caught up in the worry and horror and concern during it all. I wasn’t in the middle of it; I couldn’t imagine being in the middle of it. But, I, like many Americans, was affected by it. And Baskin caught that feeling perfectly.

I’m hoping this, along with Towers Falling, will spark a discussion about unity and how, no matter what we look like or believe, we can work to get past anger and mistrust and hate and be better citizens together. I hope, at the very least, that this one gets read and discussed.