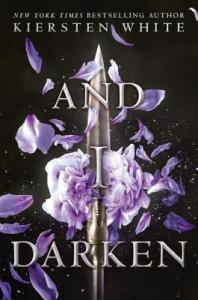 by Kiersten White
First sentence: “Vlad Dracul’s heavy brown descended like a storm when the doctor informed him that his wife had given birth to a girl.”
Support your local independent bookstore: buy it there!
Content: There’s a lot of violence, an almost-rape, and some round-about talk of sex. It’s in the Teen (grades 9+) section of the bookstore, but I would give it to a 7th or 8th grader who was interested in historical fiction.

Historical fiction, set in the 15th century, isn’t always something that jumps off the shelf at me. But the cover of this one was SO pretty… And, I admit: I was expecting a fantasy. What I got was a sweeping history of the Ottoman empire, of two siblings — children of the Dracul line — and the paths they forged for themselves against odds.

What I got was a fascinating love triangle (brother and sister in love with the same man), one that was built on friendship and trust and where none of them could be entirely happy. It was the story of a girl who refused to be coddled and took power for herself — Lada is nothing if not fierce — in unique and interesting ways. It’s a story of forced immigration and learning to be at home in a new place. (Or not.) It’s fascinating.

But it was also long; the book begins with Lada’s birth and goes for twenty years. It’s sprawling, complex, and not a little meandering. There were a ton of characters to keep a handle on, most of which I didn’t care about. I didn’t care about the campaigns and there wasn’t enough of the politics I found fascinating. Perhaps I’ll read the second (yeah, this is a first in a series), but I don’t know.

There was much to like about this book. I’m just not sure if it was enough.

One thought on “And I Darken”