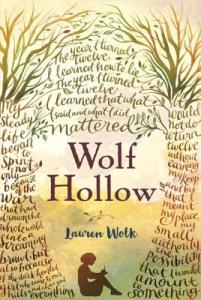 by Lauren Wolk
First sentence: “The year I turned twelve, I learned how to lie.”
Support your local independent bookstore: buy it there!
Release date: May 3, 2016
Content: There’s some death and bullying and one pretty intense injury scene. Probably not for the younger set. It will probably go in the YA section (grades 6-8) of the bookstore.

It’s the fall of 1943, and Annabelle is living a happy, quiet life on her farm in Pennsylvania. Sure, the war in Germany is raging, seemingly without end, but it doesn’t really touch Annabelle’s life. What does touch her is Betty, the new girl who has moved in with her grandparents. Betty has decided that Annabelle is her target, and demands things from her. And when Annabelle refuses to give in, Betty turns her ire on bigger targets. Like Toby, the World War I veteran who Annabelle’s family has taken care of for the past few years. And so when Betty goes missing, it’s Toby who gets blamed.

On the one hand, this really grew on me. It took about 100 pages, but I finally got to where I was invested in Annabelle’s story, and curious about the direction it was taking. The writing is excellent; Wolk really does know how to spin a story. And I thought that, even though it’s a work of historical fiction, the themes of acceptance of others and defending the innocent were incredibly timely.

My problem with it? It’s not really a children’s book. Our narrator is reflecting back on her childhood, so everything is kind of infused with adult sensibilities. (At least: I thought so.) I appreciated that the parents were good parents, helping out when Annabelle confessed the bullying to them. But, it just doesn’t feel like a book I can give to a kid (maybe that special, precocious kid? The 9-year-old who likes Harper Lee, maybe.). Maybe I’m being too sensitive, dumbed down by Diary of a Wimpy Kid-like books. Maybe this is like Pax, which I had a viciously violently negative reaction to, but it turned out it was just me.

Though I didn’t have a negative reaction to this. I liked it, I thought it was well-written and the story incredibly powerful. I just don’t think it’s really a kids’ book.