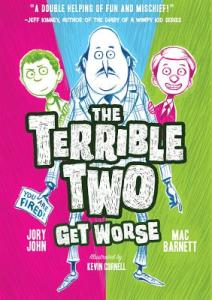 by Mac Barnett and Jory John
First sentence: “Welcome back to Yawnee Valley, its green hills and cows, cows, cows.”
Support your local independent bookstore: buy it there!
Others in the series The Terrible Two
Review copy pilfered from the ARC shelves at my place of employment
Content: It’s silly, but (mostly) harmless. It’s in the middle grade (grades 3-5) section of the bookstore.

Niles and Miles are back, pranking the poor unsuspecting citizens — well, mostly one — of Yawnee Valley. They have gotten so bad, that the principal of their school gets fired — well, put on indefinite, unpaid leave — and his super-strict father takes over the school. He cancels everything, and effectively puts a stop to Niles and Miles’ pranks. (The best way to do that is to pretend the prank doesn’t happen. It’s the reaction that makes it a prank.) In essence, he makes Miles and Niles into “normal” students. But, because that would be a boring book, Miles and Niles team up with their former arch-enemy to kick the current principal out, and get their mojo back.

Huh. Writing that out, I sounds ridiculously stupid. (Maybe because it is…) But that’s the point, really. It lacks the cow facts of the first one that I really enjoyed, but other than that, the stupid, stupid humor of Barnett and John are back. I’m not sure it’s as funny as the first one (I liked the prank war that escalated, mostly), but it had it some moments that were pretty funny. It’s a good addition to this silly series, and I know it’ll appeal to those Wimpy Kid fans who are looking for something different.

2 thoughts on “The Terrible Two Get Worse”