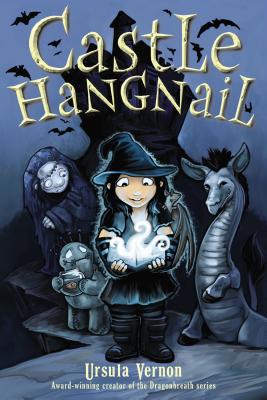 by Urusla Vernon
First sentence: “It was a marvelously dark and dour twilight at the castle.”
Support your local independent bookstore: buy it there!
Content: There’s nothing in here that a third-grader (and up) wouldn’t enjoy. Plus lots of white space and illustrations for the reluctant readers. It’s in the middle grade (grades 3-5) section of the bookstore.

Molly is a 12-year-old twin with a knack for magic. So when her friend Eudaimonia gets an invite to become the Master of Castle Hangnail, a kind of small, run down castle in need of some sort of Wicked/Evil Master in the middle of nowhere, Molly jumps at the chance. Perhaps, if she can learn to become a Master of a castle, she can get the respect she’s been wanting.

However, Molly finds it’s not as easy as saying she’d do it. The Board of Magic has several tasks that she needs to accomplish (among them: securing and defending the castle, committing acts of smiting and blighting, and winning the hearts/minds of villagers by any means necessary) before she can truly be called the Master. Plus there’s the small feat of getting the minions in Castle Hangnail on her side. Not to mention that her parents (and “good” twin sister) think she’s just away at summer camp…

Oh, this book was delightful. So, so very delightful. The tone is a lot like Terry Pratchett’s Tiffany Aching series: a smart, no-nonsense girl who figures out how to be a “wicked” witch with some hilarious side-kicks and a lot of snide asides. There’s so much to love. From the goldfish who always thinks she’s dying to the steam fairy who doesn’t deal with cold well, to the plumber who  “when he knelt to work on the boiler, you sall rather more of Harry than you wanted.” The tone, the characters, even the bullying (which it was, even if it never was called that) were all spot-on and made this book absolutely enjoyable to read.

One thought on “Castle Hangnail”