by Janelle Brown
Read by Julia Whelan, Lauren Fortgang & Hillary Huber
Support your local independent bookstore: buy it there!
Or listen on Libro.fm
Content: There is a lot of swearing, including many f-bombs, as well as non-graphic depictions of sex. It’s in the Fiction section of the bookstore.

Nina Ross has always been at the mercy of her mother’s lifestyle. They’ve moved over and over again, never quite getting ahead. Mostly because her mother really couldn’t hold down a job, preferring to con rich men out of their money. It’s not been a great life, except for that one year when she lived up in Tahoe, and met Benny, but was put off by his uber-rich family (including his sister, Vanessa). But that was all in the past, and Nina herself has resorted to conning and stealing with her boyfriend to help pay her mother’s medical bills since she came down with cancer.

Vanessa is the privileged daughter of a once uber-wealthy family. She wanted to make her own mark on the world, though, so she tried out several things (losing a lot of her trust fund) until she settled on being an Instagram influencer and all that comes with it. But her mother committed suicide, her brother is in an asylum because of his schizophrenia, and her father died and left her the family home, Stonehaven, at Tahoe.

Which is where Vanessa and Nina’s lives intersect: Nina and her boyfriend head up to Tahoe to con Vanessa out of the money Nina is sure is in the house safe. But will they succeed?

Alternating Vanessa and Nina’s viewpoints, this one kept me thoroughly engrossed. I don’t know if it was in part because the narrators were so fabulous (So fabulous!) or if it was the story that kept me interested, but I would sit for hours (working on puzzles) listening to the tale of Vanessa and Nina unfold. There’s a lot in there as well: class issues and privilege and perspectives and how we do or don’t trust and believe in people. Ultimately, it is the story of two women figuring out how to believe in themselves. 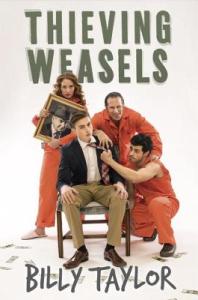 by Billy Taylor
First sentence: “I would have killed to go to Princeton.”
Support your local independent bookstore: buy it there!
Content: There’s a handful of swear words (no f-bombs that I remember) and some off-screen, implied sex. Plus drug use and teen drinking. It’s in the Teen Section (grades 9+) of the bookstore.

Cam Smith has a goal: finish up at his boarding school, Wheaton, get into Princeton with his girlfriend, and leave his dirty, awful past behind. Then: his dirty, awful past comes for him. In the form of his Uncle (Wonderful, meant very sarcastically), his cousin Roy, and his mother. Who supposedly attempted suicide and is in a mental institution. It turns out that Cam — who is really Skip O’Rourke — is needed for a Big Job, one that will pay everyone lots of money and so they can all be Very Happy. What it turns out to be is a royal mess.

I was torn about this one. On the one hand: long con books. I love heist and long con books. It’s fun to follow the clues, to figure out who is conning who (in this case, everyone is conning everyone) and to see who comes out on top. This one, as far as cons go, was probably overly complicated (it kept twisting and turning), but in the end, very satisfying.

On the other hand: Cam/Skip’s mom was AWFUL. Beyond awful. Neglectful and borderline abusive (“I’m doing this for your own good”), in the end I just couldn’t handle her. (Maybe my opinions on bad mothers have changed since having E in the house…) I not only wanted to smack his family, I actively despised them. The uncle was awful, the cousin was a brat. But his mother didn’t deserve anything but scorn. And perhaps Taylor meant it to be that way, to have someone so awful that the illegal things Cam/Skip did weren’t “too bad”, but it grated on me. In the end, I think it was supposed to be humorous, but I found myself often annoyed. Which is never a good sign.

So: not bad, but not the best con book I’ve ever read, either.