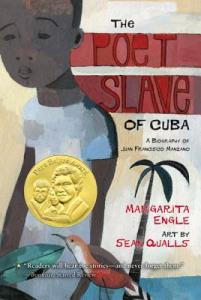 by Margarita Engle
First sentence: “My mind is a brush made of feathers”
Support your local independent bookstore: buy it there!
Content: There is talk of torture and beatings, but nothing graphic. It would be in the middle grade (grades 3-5) section of the bookstore.

This slim novel (sort-of; it’s touted as a biography, and it is biographical, but I’m not sure it really counts as a “biography”) depicts the childhood and early life of noted Cuban poet Juan Francisco Manzano, who was, for much of his life, a slave. Although the verse is spare, Engle doesn’t hold anything back: Juan was not only taken from his parents to be a pet of his first master, he was denied his freedom (his first master willed him his freedom at her death) and sold to a horrible woman who beat, tortured, and nearly killed Juan. The poems/chapters are told from varying points of view: Juan, his parents, his owners, and one of his master’s sons. They tell of his desire to learn, to express himself, and the punishments he received because of them. It’s heartbreaking.

Engle has captured not only the difficulties that Juan faced in his life, but his capacity for hope, for happiness, and for creativity. Her poetry is beautiful, and she allows Juan’s story to come through.