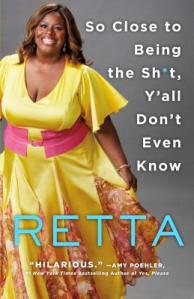 by Retta
Read by the author
Support your local independent bookstore: buy it there!
Listen to it at Libro.fm
Content:  Lots and lots and lots of swearing, including multiple f-bombs. It’s in the humor section of the bookstore.

I’ve said it here before: I have a weakness for celebrity memoirs, especially when read by the author. And so, even though I don’t really know a whole lot about Retta (aside from that she was Donna on Parks and Rec), I splurged for this. And I found it to be extremely delightful. She is a funny writer, but more than that, she is a funny story teller. She holds nothing back, from the way she grew up to her struggles with money and finding an acting job, to her accidental love for the LA Kings. It’s an entertaining journey with a lot of laughs along the way.

I’m not sure there’s much else to recommend it, except that it’s utterly delightful and a lot of fun. Sometimes, though, that’s exactly what you need. 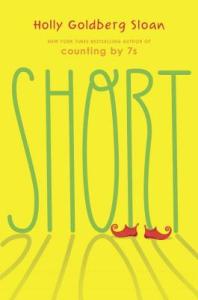 by Holly Goldberg Sloan
First sentence: “I spend a lot of time looking up.”
Support your local independent bookstore: buy it there!
Release date: January 31, 2017
Review copy provided by the publisher.
Content: There’s some more “grown up” stuff that 3rd graders might be confused about (well, nothing specific; it just felt more that way), but it’s good for the 5th grade and up. I’ll probably put it in the middle grade (grades 3-5) section of the bookstore, for now.

Julia Marks is short for her age. She’s mostly okay with this, though she is tired of the jokes and tries not to use the word “short” hardly at all. So, when her mother finds something for her and her younger brother to do this summer, in the form of being munchkins in a local performance of The Wizard of Oz, Julia is less than thrilled. Especially since her dog recently died. But then she meets Olive, an adult with dwarfism, and suddenly the summer becomes much more… wondrous. She also meets her neighbor, Mrs. Chang, an older woman who turns out to be a lot more than Julia initially thought. As the summer progresses and rehearsals go on, Julia learns that she’s capable of, well, big things.

Like all of Sloan’s other books, this one is incredibly charming. Sloan has a gift for taking simple situations — a summer play, a girl who is insecure about her height — and making them Grand. It seems a simple plot, but Julia is a fantastic character to spend a book with. And the characters Sloan surrounds her with, from Olive and Mrs. Chang to all the other bit (and not so bit) players, are equally as wonderful. Sloan makes you want to fall into the book and experience life right along with Julia. Sloan has a way of capturing the littlest parts of every day life and making them magical.

A delightful book, one that will hopefully be as beloved as Sloan’s others.