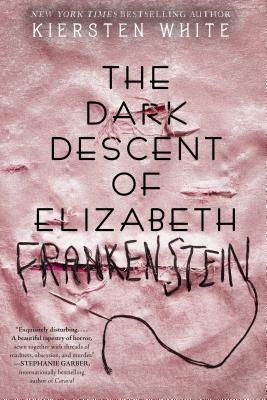 by Kiersten White
First sentence: “Lightning clawed across the sky, tracing veins through teh louds and marking the pulse of the universe itself.”
Support your local independent bookstore: buy it there!
Review copy provided by the publisher.
Content: There is some talk of violent acts, and one swear word. It’s in the YA section (grades 6-8) of the bookstore.

This book is being billed as a retelling of Mary Shelley’s Frankenstein, but I think it’s more a prequel: the story is of Elizabeth, who becomes a childhood companion of Victor Frankenstein, ostensibly to keep him company, but really to keep his anger and unusual tendencies in check. She is endebted to the Frankestein family for taking her in when she was a small child and basically raising her. And now that they are grown, she feels like Victor is all she has. If she doesn’t keep him in line, she will lose her whole life. So, when he disappears after going away to school, Elizabeth goes after him. And what she discovers is, well, the subject of the classic book.

What this really was (or at least the way I read it) about was the portrait of an abusive man and a woman’s response to it. Victor, if you’ve read the original, is not a nice person. And the way White wrote him, he was never a nice person. And Elizabeth was gaslighted from a very young age. Victor was her world, and the way White portrayed it, that was never a good thing. Or, maybe that’s just the way I read it. Either way, I was angry and disturbed and more angry. It was an interesting book, though: Elizabeth had a phenomenal growth arc, and there were some characters along the way who helped her realize just what an awful situation she was in.

In the end, though, I couldn’t get past the abusive relationship at the heart of it, and the book just made me angry. Maybe that’s a good thing?