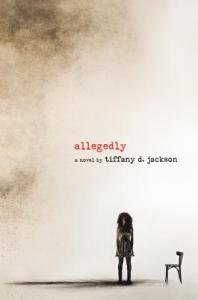 by Tiffany D. Jackson
First sentence: “Some children are just born bad, plain and simple.”
Support your local independent bookstore: buy it there!
Content: There’s a lot going on here: drug use, (tasteful) sex, lots and lots of swearing, not to mention more mature themes. It’s in the teen section (grades 9+) of the bookstore.

Mary Beth Addison was convicted at 9 years old for the murder of a baby, Alyssa. She never said a word in her interviews with detectives, and was convicted in the court of public opinion: some children, Mary being one of them, was just Bad. It didn’t help that the baby was white, and Mary is black.

Six years later, she’s out from “baby jail” (her words) on good behavior, and in a group house with five other teenage girls, convicted of crimes, some more major than others. She was just trying to survive until she met Ted and got pregnant. When she realizes that the state could take her baby away from her, she decides to take action: she wants to go to college, so she attempts to take the SATs. But, mostly, she finds her voice and decides to tell people what really happened the night Alyssa died.

This books was… a lot. Seriously. A LOT. So much to take in: a critique on parenting and poverty and the justice system and white privilege and teenage pregnancy and and and… It’s SO well written and so compelling, that even in its worst moments, when I, as a white woman, had to look at it and realize just how far from my lived experience this book was, and realize that there are people — KIDS — out there LIVING this experience, I could NOT put it down. It has a good mystery element to it as well — what really happened the night Alyssa was killed, and how can we really believe anyone’s testimony — but, as social critique, it’s superb. And it’s a great story as well. Jackson had me totally won over to Mary’s side, and yet left questions and doubts and open ends all the way to the very end.

One thought on “Allegedly”