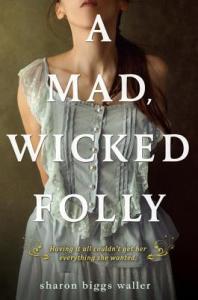 by Sharon Biggs Waller
First sentence: “I never set out to pose nude.”
Support your local independent bookstore: buy it there!
Content: There’s one steamy kissing scene and some posing “undraped” (it’s not naked, it’s nude if it’s art). It’s in the YA section (grades 6-8) of the bookstore.

it’s 1908, and all Vicky Darling wants is to be an artist. She has found a community in Paris that she sneaks away to, away from her finishing school, and draws to her heart’s content. The thing is: Art is not done in Vicky’s social circles. At least not by women. Sure, they can paint… but only acceptable things: flowers, furniture, etc. Not Art. And definitely not Nudes.

So, when Vicky poses nude for her (all-male) art class, it causes a scandal. And she’s sent home to London where her parents decide the best thing is to marry her off as quickly as possible (she’s 16!) to curb her desires to Make Art. Because, of course, being a wife and mother will be so fulfilling that Vicky won’t have time for Art.

Except, it doesn’t really work. it’s also the time of the suffragette movement, and Vicky is inspired to help out. Initially, it’s only to draw them to work on her application to the Royal Art College, but eventually, she finds herself emboldened and empowered by these women who are fearlessly trying to exercise their right to vote.

It doesn’t help, either, that she’s met a supportive (and cute!) police officer, who’s willing to be her muse.

Two guesses as to which one she picks.

I actually really enjoyed this one. It’s good to be reminded of the initial fight for equal (such as they are) rights for (white, mostly) women, and the struggles and trials they went through. And while Waller was sympathetic to Vicky and the suffragettes, she never really painted the upper class world that Vicky ran in as completely morally bankrupt. Constricting, yes. And lacking in understanding. But her parents did care for her (even if her friends and their parents did not). I especially liked the end (well, most of it), when Vicky left. Waller never hid the amount of privilege she had. She didn’t sugarcoat what it cost Vicky — monetarily, but also personally — to leave, and how much she had to learn when living on her own.

It was a really well done bit of historical fiction. And thoroughly enjoyable.