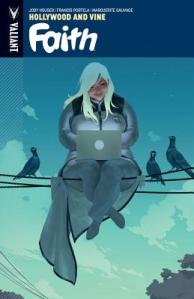 by Jody Houser, Francis Portela, and Marguerite Sauvage
Support your local independent bookstore: buy it there!
Content:  There is your usual superhero blow-em-up fare, plus some awkward moments. This would be in the graphic novel section of the bookstore if we had it.

So, in my graphic novel class this summer, we (well, me and a couple other students) ended up talking a lot about representation by women (and diversity, though not as much) in the comics/graphic novels world. One of the other students said that Valiant did an okay job with representation, but mentioned Faith as a good example of a plus-size superhero where weight didn’t really come into play. I was curious, so I picked it up.

After a traumatic experience and a bad breakup, Faith Herbert aka Zephyr (she’s a psiot who can fly and has some telekinetic ability)  has moved from New York to LA to try and do things on her own. Donning an alias, Summer Smith, she gets a job as a content writer for a culture blog/website. Even though she hasn’t made many friends and her ex has a reality TV show, Faith is doing pretty well. That is, until she discovers that psiots are disappearing and that there’s a tie-in to the new, hot sci-fi show on TV. So, of course it’s up to Faith (with some help from a few friends) to save the day.

On the one hand, yeah: it was refreshing to see an atypical superhero doing cool and amazing things and being comfortable in her own body (or at least not having her body be the center of the story line). But, and maybe this is me, I think much of what was “revolutionary” by that is diminished by the fact that everyone else in the book is skinny and/or super built. What’s the point of making the main character look more realistic if everyone else (from her crushes to the love interest to the bad guys to her co-workers) is “normal” and she’s the odd woman out? I kept noticing that she was always the fat one, and felt — even though it’s written/drawn by women — that somehow they were trying to draw attention to her size. So, even though the plot wasn’t about her weight, the book, ultimately, ended up being about her weight. Which made me sad. (To be fair, maybe it’s just me?)

That said, I liked the story. I liked Faith, and her fangirlness. I liked her daydreams and her awkwardness and her moral code. And I liked the resolution in the end.

It wasn’t a bad graphic novel and I am glad I read it.