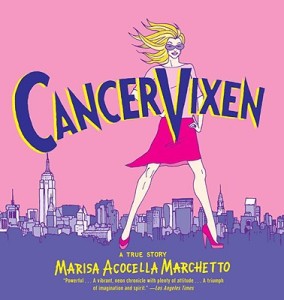 by Marisa Acocella Marchetto
First sentence: “What happens when a shoe-crazy, lipstick-obsessed, wine-swilling, pasta-slurping, fashion-fanatic, single-forever, about-to-get-married big-city girl cartoonist (me, Marisa Acocella) with a  fabulous life finds… a lump in her breast?”
Support your local independent bookstore: buy it there!
Content:  There is swearing (no f-bombs), some tasteful nudity, and lots of naked breasts (it is about breast cancer, after all).  It would be in the adult graphic novel section of the bookstore, if we had it.

The first sentence of this one kind of says it all: Marchetto, a cartoonist who works for Glamour and the New Yorker, had a fabulous life with a new Italian boyfriend she was planning on eloping with, when she — out of the blue, because what other way does cancer happen? — is suddenly diagnosed with cancer.

Much of the book is a detailed blow-by-blow of Marchetto’s cancer treatment, and how that affected her life and  relationships. I found it interesting — I’ve never known anyone who’s gone through this before — but I wasn’t enamored with the story. It was very much “it girl” New York: all the right clothes, all the right friends, all the right things. (Though, she had a LOT of friends, which is a great thing!) I was more interested in her body image issues, especially regarding the models who kept throwing themselves shamelessly at Marchetto’s fiance, Silvano. But Marchetto didn’t really dwell on that; she brushed past it as part of her “negativity”. There was also an undercurrent of evidence why universal health care is needed: she was uninsured when she was diagnosed, and was in a panic about having to pay out of pocket for the treatment. Which turned out to be nearly $200,000. But, she didn’t dwell on that, either. It was very self-centric, and, honestly, I didn’t really care for her. (I feel bad saying that, though.) The art was a bit meh, as well, though I understand why she chose to draw it slightly cartoony; if it were more realistic, it’d be a lot more disturbing. This way, Marchetto was able to keep it from getting too dark while remaining honest about the ups and downs of cancer treatment (and her life).

Not bad, but not my favorite, either.