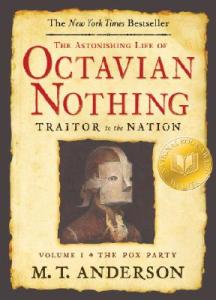 by M. T. Anderson
First sentence: “I was raised in a gaunt houses with a garden; my earliest recollections are of floating lights in the apple-trees.”
Support your local independent bookstore: buy it there!
Content: There’s violence and talk of human bodily functions. It would be in the YA section (grades 6-8) of the bookstore if we had it.

Octavian had an idyllic childhood, growing up in the house with a bunch of rational philosophers (in the Novanglina College of Lucidity) where his every move was studied and cataloged. He was dressed in the finest silks, taught to play the violin and speak Greek and Latin and French. And he had no idea he was black and a slave. That is, until the sponsorship for the society lapsed and they found a new person to sponsor them, someone who felt that Africans were truly less than people. From there, Octavian’s life changes, and not for the better. He escapes, and gets involved in the Revolutionary War.

I heard lots of good things about this one when it first came out, and it won the National Book Award and a Printz honor. I wanted to like it, to understand what all the excitement was about it. But. Times have changed in the past 12 years, and I’ve changed a bit with them, and the one thing I couldn’t get past was that this felt like appropriation. I like Anderson as a writer (for the most part), but to write a slave story just felt… wrong. Yeah, he made some of the white people sufficiently awful (well, one of them anyway), but he also has a literal white savior narrative at the end of the book which really sat poorly with me. And to be honest, I lost interest. I kind of skimmed through the last third of the book, just to see what happened, but I wasn’t engaged.

And I have no interest in reading the second part. I wish I had liked this better.

2 thoughts on “The Astonishing Life of Octavian Nothing, Traitor to the Nation: Volume 1”