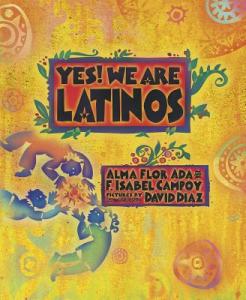 Book Summary: A series of narrative poems, followed by a brief narrative non-fiction essays about different aspects of Latinx history and culture. These are not based on any one person, but are a composite of the different variety within the Latinx world.

Impressions: I loved this one! I don’t often read poetry collections (and when I do, they are usually the humorous ones. My current favorite is I’m Just No Good at Rhyming) and I didn’t quite know what to expect. What I got were some narrative poems, each telling a story about a different child’s Latinx identity. It served as a reminder that even though we (white people, the media, etc.) lump all Latinx people together, there’s a lot of diversity and richness of heritage within the culture. (And, I was reminded, that they don’t all get along!) I really enjoyed the historical information that came after each poem, which told a bit about the history and culture of the person in the poem preceding. I knew quite a bit of the information already, but it was good to be reminded of the history (and some of it recent history) and how much of the United States was originally Spanish. (And that the Brits weren’t the only oppressive colonizers in the world.) Definitely a highly recommended collection.

Review: While the review was short and more oriented to the plot than any opinions about the book, Leon-Barrera did remark that the book was “refreshing” especially because of the vast representation from the Latinx world. She also wrote, “The vignettes also help to illustrate the meaning of being mestizo–the blending of indigenous, African, and Spanish lineage-mentioned in the introduction and explored throughout.” This was something I noticed but didn’t realize was as important as it is. She also commented on the inclusion of Asians in Latin America, which, she wrote, “is often overlooked in children’s literature”.

Uses: This was used as part of our city’s Big Read a few years back. It could also be used in a poetry writing workshop for middle or high schoolers, since these are all accessible, free-verse, narrative poems.