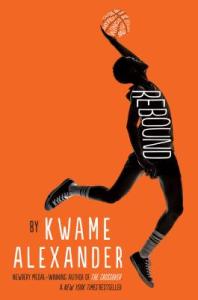 by Kwame Alexander
First sentence: “It was the summer when Now and Laters cost a nickel and The Fantastic Four, a buck.
Support your local independent bookstore: buy it there!”
Others in the series: Crossover
Review copy provided by the publisher.
Content: There’s some drug dealing and stealing, but it’s all incidental to the plot. There’s a wee bit of romance. Crossover is in the Newbery section, and so I might put this one next to Booked in the Middle grade (grades 3-5 section) or I might move it to the YA section (grades 6-8) where it feels like it should go.

Even though this one is a pre-quel to Crossover, you really should read that one first.

It’s 1988 and Charlie Bell, the father of the characters in the Crossover, has just lost his father to a major heart attack. It’s the end of his 7th grade year and the loss — and the subsequent grief of both him and his mother — has put Charlie at odds with the world. He doesn’t want to deal with school or friends or his mother, even though he tries to put his father’s death out of his head; all he wants to do is sit and read his comic books. But then, he gets mixed up a bit with his friends older brother, and gets caught stealing (nothing major though), so his mom ships him off to DC to his grandparents (his father’s parents) for the summer.

It’s there that he learns how to deal with his dad’s death, and finds a passion for basketball that stays with him the rest of his life.

I’ve become a fan of Alexander’s in the years since his Newbery win, and this is no exception. It’s a lot geekier than his other books — there are comic poems, to reflect Charlie’s love of the comic book, and he’s not a suave as his kids turn out to be. But, it still has Alexander’s signature poetic style, and it tells the story of a kid coming to terms with his grief extremely well. I loved the 1980s references (throwback to high school!) and I thought Alexander handled the girl characters much better in this one (in fact, Charlie’s cousin, Roxie, is pretty amazing!).