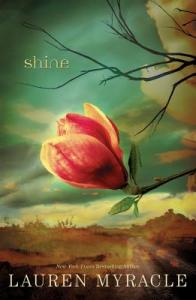 by Lauren Myracle
First sentence: “Patrick’s house was a ghost.”
Support your local independent bookstore: buy it there!
Content: This one has drug use and drinking by teenagers and a pretty graphic rape scene. It would be in the Teen (grades 9+) section of the bookstore if we had it.

Cat’s former best friend, Patrick, has been found at the local convenience mart beaten and tied up to a gas pump, left for dead. The local sheriff is calling it a hate crime, since Patrick is gay, and that it was probably some out of towners who did it. He was right about the hate crime part, but Cat’s convinced it’s someone in the small, southern town of Black Creek, North Carolina. So, she sets out to find out who, which means facing her brother’s friends and her past.

Oh, this was a hard book. It’s a mystery — sort of — but more, it’s a portrayal of what poverty and toxic masculinity can do to people. It turns them to meth, makes them suspicious of each other, makes them feel like they can just take things without any sort of consequences. There’s rape in this — and that was SUCH a difficult scene to get through — and just plain hopelessness. I think Myracle gave it a happy-ish ending in order to alleviate a lot of the general bleak feel of the novel (I certainly was expecting a different ending). I did figure out who committed the crime a little more than halfway through, and I even figured out why, but I kept reading because I wanted to see how it all would play out. Myracle did an excellent job with Cat’s character development — she went from a hurt, scared girl into a more confident one, facing down the boy who raped her and her brother’s friends for their various “boys will be boys” infractions.