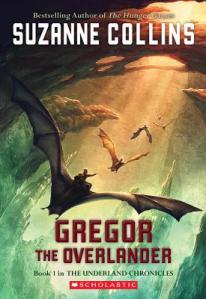 by Suzanne Collins
First sentence: “Gregor had pressed his forehead against the screen for so long, he could feel a pattern of tiny checks above his eyebrows.”
Support your local independent bookstore: buy it there!
Content: There are a couple of battles and some tense moments. It is in the middle grade (grades 3-5) section of the bookstore.

First a story: M read this when she was about 10 or 11 years old, and told me that it was SO good and that I needed to read it. I balked: Gregor goes underground and goes on a quest with talking cockroaches?! Ew. (I loathe cockroaches. Ugh.) She finally, after years of bugging me, gave up and moved on. However, when I saw it on the list for the science fiction/fantasy module in my children’s lit class, I remembered M’s urging and I picked it up (finally!).

And you know what? She was right. (Not the first time.) The basic premise is that Gregor, whose father has been missing for 2 years, falls into the Underland, a world where there are some humans who live in an uneasy peace with giant spiders, cockroaches, and bats, and whose mortal enemies are the giant rats. (And yes, all the animals talk.) Once there, Gregor finds out that he may be/is the Warrior who would fulfill the prophecy, perhaps bringing peace between the humans and the rats. And, oh by the way, the rats have his dad, so maybe they can rescue him, too.

Yeah, it sounds trite: there are talking animals and a prophecy (they’re all the rage!) but Collins is quite masterful in telling a story. She keeps the action moving, she makes us care about Gregor and all the other Underlanders and she even gives us a nice twist at the end that careful readers will see coming (I didn’t guess, but I wasn’t surprised). And she included Gregor’s 2-year-old sister, Boots, who is literally the best character ever. She’s funny and charming, and provides a humanity to the other characters that otherwise wouldn’t be there.

Oh, and this is a bit of a spoiler: I cried when one of the cockroaches died.

2 thoughts on “Gregor the Overlander”