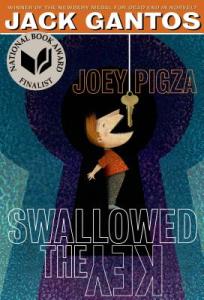 by Jack Gantos
First sentence: “At school they say I’m wired bad, or wired mad, or wired sad, or wired glad, depending on my mood and what teacher has ended up with me.”
Support your local independent bookstore: buy it there!
Content: It’s short, and it’s got short chapters, so probably good for reluctant readers. It’s in the middle grade (grades 3-5) section of the bookstore.

Joey Pigza has problems sitting still and focusing. It’s just the way he’s “wired”: he has an excess of energy and he just can’t focus. Unfortunately, that tends to get him in trouble, especially in school. That is, until one day when he accidentally hurts another student with scissors. Then he’s sent to a “special ed” (ugh) school in order to figure out how to behave better. Which not only involves getting Joey the right medication, but als teaching him how to focus so he can learn.

Honestly? I wanted to smack the adults in the book. I guess my parenting style is “let them be who they are” which I suppose doesn’t always translate well into strict social situations, but HONESTLY. I know Joey has ADHD, and couldn’t focus, and it was a medical condition that was interfering with his learning, but I wanted to shake every single adult that told him to sit still and be “normal”. NORMAL? Really?

But Joey, I felt so bad for him. His mother abandoned him (but came back), his grandmother was abusive, his teachers were impatient with him… he just needed some time, some caring, and some attention to help him focus. Okay, so maybe there’s a lot of class issues in this one as well: they were lower class — his mom worked at a salon — and so she didn’t have the time to sit at home and interact with him in ways that he needed. And his diet of candy and fast food also is a class thing. Maybe I’m reading too much into this one, but there’s a lot to unpack about class there, I think. And bad adulting. And about kids with ADHD.

All this from a lower-end middle grade book. Go figure.