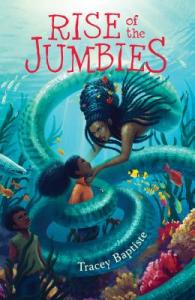 by Tracey Baptiste
First sentence: “Corinne La Mer dove through the waves.”
Support your local independent bookstore: buy it there!
Others in the series: The Jumbies (which I know I read and will swear I reviewed, but I guess I didn’t)
Content: There’s some scary parts. It’s in the middle grade (grades 3-5) section of the bookstore.

This is the second in a series of books set in the Caribbean, based loosely on the folklore there (Baptiste is from Trinidad). I’m not entirely sure what happened in the first book (it’s been two years since I read it!), but from what I gathered from this one, Corinne is half jumbie (her mother was a jumbie) and her aunt is out (and I can’t remember why) to capture the children on the island and keep them for her own. Corinne almost saves them all. This one picks up some months (maybe a year?) later, and children are going missing again. The island residents are suspicious: since Corinne is a jumbie, she must be involved somehow. So, Corinne knows she has to solve this problem. She goes to Mama D’Leau, the queen of the seas, and follows several mermaids over the ocean to Ghana in order to solve this problem. Except, it only solves half, and Corinne has to choose between her human and jumbie halves in order to bring peace to the island again.

I love Baptiste’s storytelling: she captures a place perfectly, and makes the island folklore come alive. (Perhaps it’s just me: I love folklore, so I’m already on board for this!) I love the way she updated the tales, but retained a classic air about them. Corinne is a plucky heroine, but she also has the help of her friends and her father, in order to accomplish everything she needs to. It’s really a delightful story.