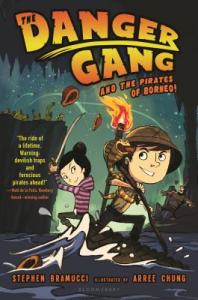 by Stephen Bramucci
First sentence: ”
Support your local independent bookstore: buy it there!
Disclaimer: I spent a day taking Steve around to school visits. He’s definitely the coolest guy you’ve never heard of.
Content: There’s a bit of violence, and a couple of intense moments. It’s in the middle grade (grades 3-5) section of the bookstore.

Ronald Zupan’s parents are these huge adventurers, traveling the world looking for ancient artifacts. But, they made one promise: they will always be home for Ronald’s birthday. So, when he woke up on his 11th birthday, and they weren’t there, he immediately knew something was wrong. He ropes his trusty butler, Jeeves (real name: Thomas) and his pet King Cobra, Carter,  and his fencing nemisis Julianne Sato into an adventure to find his missing parents. Who just happen to have been kidnapped by pirates. In Borneo.

Yes, this book is just as silly as it sounds. But that’s the point. Ronald is delightfully dense (Jeeves/Thomas has corrections at the end of every chapter), and Julianne ends up being the brains of the operation, while Jeeves is the, well, worry wart. And yet, they figure out how to work as a team by the end of the book, in spite of everything that’s against them. It’s a fun adventure story as well: Ronald and the gang goes all sorts of places, and there’s all sorts of little tidbits  throughout the book. (Plus the illustrations are perfect for the book!)

Definitely a lot of fun, and perfect for those reluctant readers looking for a good book to dive into!