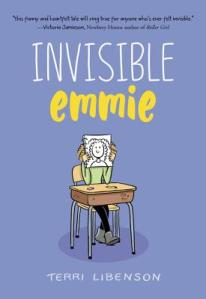 by  Terri Liebenson
Support your local independent bookstore: buy it there!
Content: It deals with crushes and middle school awkwardness, so younger kids might not be interested. It’s in the middle grade graphic novel section of the bookstore.

Emmie is quiet. That’s really her defining feature. She doesn’t speak much, except to her friends. And everyone (from her friends to her parents) is always trying to get her to be more outgoing. But she’s (mostly) okay with being quiet. Until one day, when she writes a note to her crush and then drops it, where it’s picked up by another kid. All of a sudden, Emmie’s no longer invisible.

There’s a secondary story, one that involved Katie, a super popular, put together girl, that’s told in panels (as opposed to Emmie’s story, which is more narrative-driven with side illustrations). The two stories intersect near the end, and do so in an interesting way (though K didn’t like how they resolved).

It’s a good look at fitting in and making friends. I liked the way Libenson told the story (I liked how it resolved), and I felt for Emmie. It’s hard being the youngest (K should know!) and feeling overshadowed a lot. I liked how Emmie found her footing and figured out how to being to make her place in the world.