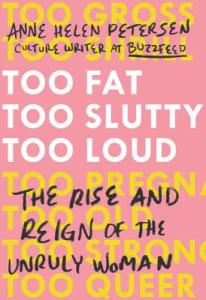 by Anne Helen Petersen
First sentence: “On November 8, 2016, I woke up early and said, to no one in particular,’I’m so excited to vote for our first female president!'”
Support your local independent bookstore: buy it there!
Content: There’s a lot of f-bombs. It’s in the Sociology section at the bookstore.

I picked this up after hearing an interview with the author on the It’s Been a Minute podcast (which is a fantastic podcast, by the way). It was a smart, interesting interview and I found myself wondering if the book was going to be as smart and as interesting.

And it was. Petersen looks at the representation of women in the media/popular culture through profiling ten celebrities she’s deemed “unruly”, literally not abiding by the set “rules” of culture. They each have a chapter and a reason why they’re unruly, ranging from Too Strong (Serena Williams) and Too Old (Madonna) to To Shrill (Hillary Clinton) and Too Slutty (Nicki Minaj). It’s an interesting look at each of these women’s careers, as well as the public perception of them. I thought it was fascinating. Some of the chapters are stronger than others (the Madonna chapter was actually more a critique of Madonna’s reactions to the cultural perception of her and a wish that she’d be better at resisting aging “gracefully”), but they’re all equally fascinating. There is a lack of people of color (Serena and Nicki are the only two), possibly because there’s a lack of women of color in the celebrity sphere… but I’m not the right person to judge that. I did find it a good, critical look at how we (men and women) perceive female celebrities and, by extension, how we perceive women in general.