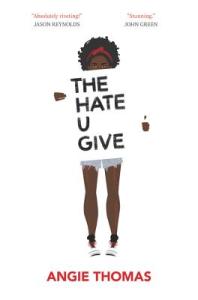 by Angie Thomas
First sentence: “I shouldn’t have come to this party.”
Support your local independent bookstore: buy it there!
Content: There is a lot of swearing, including multiple f-bombs, some almost sex, and some drinking. It’s in the teen section (grades 9+) of the bookstore.

I came to this one in a round-about way. I have a teen review group, and one of them read this (and loved it), and so I didn’t feel a need to read it. Too many other things on the pile. Then, it became a big thing (and rightly so), being talked about all over the internets. and so we picked it to be a part of our summer teen book group. And that is really what pushed me to read it. (If all else fails: pick it for a book group. I’ll read it then!)

As one of my co-workers said, I’m reading this as a privileged white woman, and it makes one VERY aware of that privilege. At first, I thought I was not hip enough for Starr and her world, but after a couple of chapters, I found myself immersed in the world Starr inhabits. Thomas very eloquently shows (not tells!) the reader what it’s like to live in the inner city, the conflict- both with the “system” and with each other – that they face every day.

The basic plot is this: Starr is at a party, when a shooting happens. As everyone is fleeing, she ends up with an old friend, Khalil, and they end up getting pulled over by a white cop. And, because this unfortunately happens too often, the cop shoots Khalil. And from there, the story follows Starr as she deals with the aftermath of that. From dealing with PTSD after the experience (it’s her second friend who has been shot and killed), to dealing with being a witness at the grand jury (and all the implications that brings), to dealing with the balance between her home life and her school life — she goes to a prep school in the suburbs — and her friends there. Thomas treats everything complexly and is incredibly forthright and honest about absolutely everything. It’s an excellent portrait of the life of a black teenager and an important book, especially for a white person to read.

One thought on “The Hate U Give”