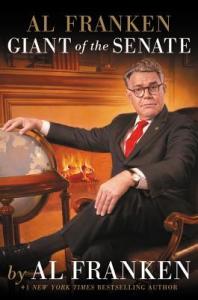 by Al Franken
Read by the author
Support your local independent bookstore: buy it there!
Content: There are six f-bombs in one chapter, mostly because there are two in the title of something Franken wrote and he said it three  times. It’s in the biography section of the bookstore.

I suppose, if you don’t know who Al Franken is, you probably won’t have any interest in this book. That said, I knew who he was, but wasn’t a huge fan.  But, I’d heard enough good about it that I decided to download the audio book.

Franken is in his second term as the junior senator from Minnesota, a former writer for Saturday Night Life, and a very, very smart writer. This book is basically a memoir of his time at SNL, his family life, his first election, and his thoughts on being in the Senate as a whole.

It’s a very smart book. And while it’s not always hilarious, it IS very funny. And insightful. Be aware that Franken is a Democrat, and so there’s definitely a partisan flavor to it (he blames Newt Gingrich, Rush Limbaugh, and Mitch McConnell for the current state of politics), but he also recognizes a need to work together, and has some good things to say about many Republicans (just not Ted Cruz). It’s insightful, interesting, and incredibly engaging.

And on audio? Very delightful. I loved listening to Franken read his words (I often enjoy celebrity memoirs more in audio) and thought it was a definite value-added to the book. He kept me engaged in the book, and I looked forward to turning it on whenever I got in the car.