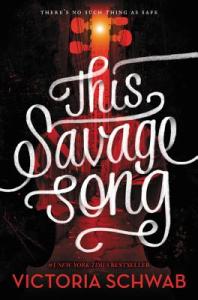 by Victoria Schwab
First sentence: ”
Support your local independent bookstore: buy it there!
Content: One of the main characters smokes, and there’s three f-bombs as well as a lot of violence. It’s in the Teen (grades 9+) section of the bookstore.

I’m going to say this up front: this one isn’t easy to sum up.

Kate is the daughter of the North City’s main mob boss. You pay him for protection from the monsters that go bump in the night. And if you can’t pay, well… let’s just say there’s very little mercy. All Kate wants is to be accepted and loved by her father. Which isn’t easy when he’s such a cold, hard bastard.

August is one of those monsters that go bump. In a world where there are several types of monsters — the Corsai, which basically just eat you alive; the Malchai, which are like vampires — August is the “worst”: a Sonai, which use music to suck people’s souls out of them. He is at conflict with this, but awful things happen when he doesn’t “feed”.

So, when August and Kate cross paths at a posh boarding school — August is there on the orders of his older “brother”; Kate as a last-ditch attempt to prove to her father that she’s tough enough — things, well, explode.

Lest you think this is romance-y (I did, at first): it’s not. Sure, August and Kate end up  doing things together, and (I think) caring for each other, it’s not all kissing and swooning. It’s a book that swims very heavily in the grey areas. Kate’s not especially likable as a character, and she does some pretty awful things. And yet, she’s one of the “good” guys. August is more complex as a character, and yet you’re told from the outset that all monsters are “bad”. And August, too, does some pretty awful things. It’s fascinating exploring this world.

Sure, there are questions: how did the monsters come to be? Why did the United States fall apart and reform into these territories? What happens if the monsters take over and kill off all the people? What’s going to happen next?

Schwab is a fantastic storyteller, and this is definitely a unique cross between paranormal and post-apocalyptic. I’m curious to know what happens next to August and Kate, especially since the ending of this one was so, well, final. (There are doors left open for a sequel, and this one is billed as #1, so there will probably be more.) It’s definitely a world I’ll want to revisit.