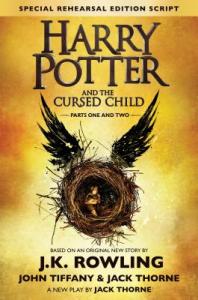 by J. K. Rowling, John Tiffany, and Jack Thorne
First sentence: “A busy and crowded station.”
Support your local independent bookstore: buy it there!
Content: There’s nothing “objectionable” for all the Harry Potter fans out there, but know that 1) the format may make it challenging for some kids and 2) the book has adult sensibilities — even though the protagonists are 14-year-olds, there’s a lot about parent-child relationships. Even so, I’ll probably put it in the YA section (grades 6-8) with all the other Harry Potter books.

So, final thoughts? It’d be a blast to see, it was fun to read, but there’s a large part of me that wishes Rowling would go back and do prequels instead of keeping up with Harry. A Maurader’s book? I’d totally be on board with that.