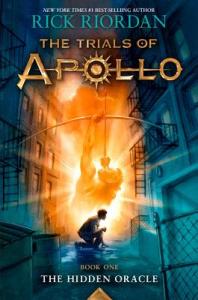 by Rick Riordan
First sentence: “My name is Apollo.”
Support your local independent bookstore: buy it there!
Others in the series: Well, it’s the first one, but it helps if you’ve read Percy Jackson and the Olympians and The Heroes of Olympus series first.
Content: There’s no swearing, and only some violence. Riordan hints at an abusive relationship, but there’s nothing graphic. I’d give it to a 10-year-old who loves the Percy world. It’s in the YA section (grades 6-8) with the Heroes of Olympus and Magnus Chase because it feels right there.

I think the best way to review this is to go over the arc that A — who read it before I did — expressed.

Was it the best book I’ve ever read? No. But it was lots of fun. Which is all I really wanted.

One thought on “The Trials of Apollo: The Hidden Oracle”