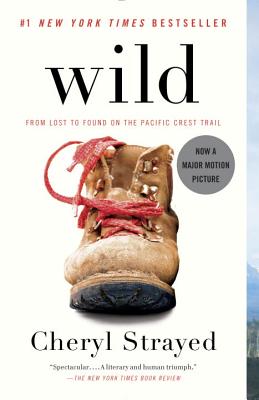 by Cheryl Strayed
Read by Bernadette Dunne
Support your local independent bookstore: buy it there!
Content: Drug use, sex, drinking, yeah: it’s all in here. Definitely not for the faint of heart.

I was wandering around, looking for a new audio book, and stumbled on this one. I figured so many people have raved about it that it couldn’t be terrible. So, I picked it up.

If you’ve been under a rock, it’s Cheryl’s personal story of her redemption, of sorts, after her mother died and her marriage fell apart (due to her infidelities and drug addiction). She decides that what she needs to do is hike the Pacific Crest Trail from California to Washington (actually, Oregon came later, after she discovered that the Sierras were snowed in) alone. She has no experience, she has no idea what’s in store for her. And yet, you have to admire her for going through with it, even when — especially when — the going gets hard.

But I couldn’t get past the “poor me” vibe that I felt was under the whole book. Maybe it’s because Cheryl didn’t narrate her own book and I never really got past that. Or maybe I’m just too judgmental (which I am, unfortunately). But while I really enjoyed the moments when Cheryl was battling against the trail, and mostly succeeding, I didn’t have much patience for Cheryl herself. (Now that I write this, it sounds really judgmental. Maybe it’s just wrong time wrong book?) I was talking to someone who had a similar experience with Eat, Pray, Love (which I really liked). Perhaps we’re more apt to judge women who travel because their lives are broken than those (men?) who just up and leave (I’m looking at you, Bill Bryson) to go experience the world.

I don’t know. I just know that I didn’t connect with this one as much as I hoped it would.